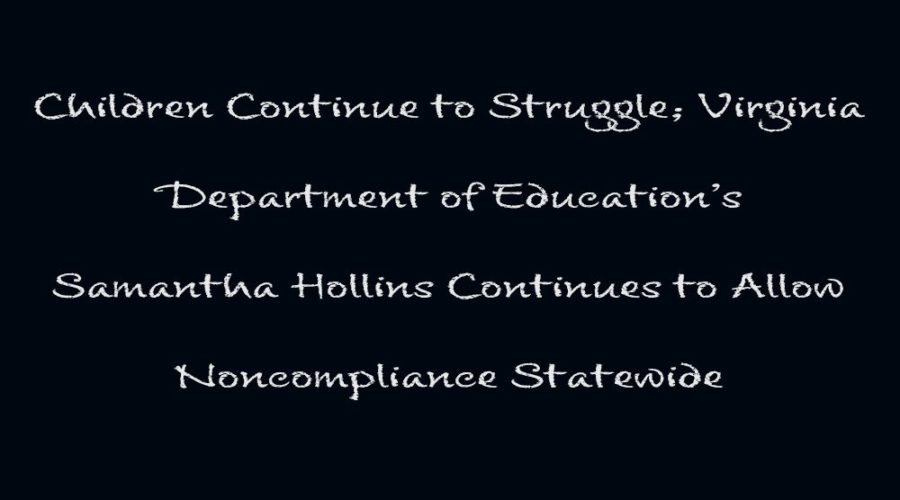 Reading and math scores have declined, according to the “Nation’s Report Card”. which was released today by the U.S. Department of Education’s (USDOE) National Center for Education Statistics (NCES).

This comes as no surprise. In Virginia, Samantha Hollins knows Virginia is in noncompliance with the Individuals with Disabilities Education Act (IDEA), but allows the noncompliance to continue.

According to NAEP, in Virginia, the following percentages of 4th graders are performing at or above “proficient” level in math and reading:

These numbers drop for 8th graders:

Hollins, who is the assistant superintendent of VDOE’s Department of Special Education and Student Services has a history of making false statements related to special education in Virginia and of looking the other way when it occurs, rather than addressing the noncompliance.

This do-nothing practice was cited by the United States Department of Education (USDOE) Office of Special Education Programs (OSEP) in 2020 when it issued a Differentiated Monitoring Support (DMS) letter to Virginia, for findings of noncompliance:

Rather than being transparent when the report was released, Hollins’ response was to issue a ten-page letter that issued false information about the report. For example, in her letter, Hollins’ included this false statement, which criticized the OSEP report:

“In its draft report, OSEP wrongly states as factual background the “active participation of the
State’s mediation coordinator in the mediation sessions themselves, in addition to the mediator of
record.” The Coordinator of Mediation Services, a VDOE employee, does not comediate either
with new or experienced mediators. Neither does the Coordinator attend all mediations.”

Yet in 2018, Art Stewart, then-VDOE’s mediation coordinator, helmed a mediation I attended, from scheduling through to the mediated agreement signed at the end. Parents spoke up and contacted OSEP after Hollins released her false statements, but Hollins remained in her position at VDOE and the noncompliance continued.

VDOE had 90 days to comply with the DMS report’s required actions.

Ninety days passed. Compliance did not follow. However, two more reports that were critical of VDOE did follow. Within six months of OSEP’s DMS report, Joint Legislative Audit and Review Commission (JLARC) released “Operations and Performance of the Virginia Department of Education” and “K-12 Special Education in Virginia“.

Parents contact VDOE about school noncompliance on a regular basis.

For example, May 2022, I made Hollins aware of Fairfax County Public Schools (FCPS) engaging in a practice I believe to be indicative of predetermination. I emailed Hollins. Her response failed to address the credible allegations of noncompliance.

The noncompliance continued, which led me to file two complaints based on predetermination in September and October 2022. VDOE opened investigations into both complaints, thus validating that the allegations provided months earlier were credible.

Hollins’ inactions in this 2022 example are echoes of its previous years of noncompliance—something that is impossible to ignore after you read the following example in OSEP’s 2020 DMS report:

“In still another situation brought to OSEP’s attention, both the OSEP State Lead and VDOE staff
were copied on emails between a parent and school staff indicating that over a period of several
months, the parent alleged that staff from a high school were not providing the special education
and related services required by a student’s IEP. The parent made numerous requests for the State
to intervene with the LEA, but the State took no action, and redirected the parent to the LEA.
Consistent with the information shared by the State during the on-site visit, the State
acknowledged that it had informed the parent that it takes no further action to determine whether
alleged noncompliance by the LEA has occurred unless the parent files a written State complaint.
The State confirmed that this is its practice in its February 8, 2019 email to OSEP as well as in
additional emails from parents copied to OSEP or directly provided to OSEP. In these emails the
State advised parents that allegations of noncompliance must be raised through the formal
dispute resolution process. The State’s emails to parents also redirect the parents to the LEA.”

September 21, 2022, a federal class action lawsuit was filed against VDOE and Fairfax County School Board (FCSB), for violations of the rights of students under the U.S. Constitution and IDEA. Data included in the initial filing indicates that between 2010 and July 2021, 847 cases were filed in Virginia and only 13 ruled in favor of parents. That number decreases in Northern Virginia, indicating a greater favoring of schools over parents, with 395 cases filed during the same period and just three resulting in a ruling in favor of parents.

Of those 11 years, Hollins has been at VDOE for many of them. Her inactions fueled the number of filings in Virginia.

For example, had she stepped in when I contacted her last May, it would not have been necessary to file complaints months later.

On a larger scale, she was aware that for years FCPS has been predetermining programming for students who have Dyslexia.

For example, in 2020, FCPS lost a due process hearing in which the hearing officer determined that the program “Just Words” is inappropriate for students who have Dyslexia. Yet, FCPS continued to propose the program for students, even after being advised of the hearing officer’s decision, and after parents and advocates shared information from Wilson, the publisher of “Just Words”, showing it doesn’t endorse “Just Words” for students who have Dyslexia. Hollins was aware of the “Just Words” decision in the earlier due process hearing—and she was aware that FCPS continued to propose it anyway.

In addition, FCPS opposed the provision of the program Lindamood Bell, which parents requested for their students who have Dyslexia. FCPS shot down the programming, making comments that it isn’t appropriate—doesn’t “stick”—even though FCPS knows it works. About ten years ago, FCPS lost a major lawsuit, in which 1) Lindamood Bell was deemed appropriate for students who have Dyslexia and 2) FCPS was ordered to pay for it, for the student who was the focus of the case. That case was argued by FCPS attorney John Cafferky, who knew the judge deemed the program appropriate. However, in the years that followed, he was involved in leading due process hearing officers to believe the opposite about Lindamood Bell.

This refusal to consider parent input on “Just Words” and Lindamood Bell tutoring amounts to a denial of parent participation, since no matter what parents and advocates said, FCPS pushed the same programming for students.

Given her position, Hollins should be aware that denying parent participation is a hallmark of predetermination.

Deal v. Hamilton County Board of Education brings up the important point that a parent’s attendance at IEP meetings doesn’t equate to parent participation:

The district court erred in assuming that merely because the Deals were present and spoke at the various IEP meetings, they were afforded adequate opportunity to participate. Participation must be more than a mere form; it must be meaningful. W.G., 960 F.2d at 1485; see also Knox County Sch., 315 F.3d at 694-95 (stating that school officials must be willing to listen to the parents and must have open minds). Despite the protestations of the Deals, the School System never even treated a one-on-one ABA program as a viable option. Where there was no way that anything the Deals said, or any data the Deals produced, could have changed the School System’s determination of appropriate services, their participation was no more than after the fact involvement. See Spielberg, 853 F.2d at 259.

The School System noted, at oral argument, that the Deals’ participation in the IEP process is evidenced by their contributions to the descriptions of Zachary’s present levels of performance and to the stated goals and objectives contained within the IEPs. The School System was unable to point to any evidence, however,  that the Deals contributed to the operative portions of the IEP-that their opinions were considered in determining the services that would be provided to Zachary. In short, nothing offered by the School System suffices to surmount the Golconda of circumstantial evidence adduced by Plaintiffs-Appellants to establish the existence of an unofficial School System policy of rejecting any requests for an intensive, one-on-one ABA program. This evidence includes the internal memorandum by Sandra Jerardi flagging Zachary’s education program as a “sensitive case with regards to school program and/or Lovaas,” as well as various comments from School System personnel, including a statement that “the powers that be” were not funding ABA programs.

In this post-COVID world, in which children need so much help, looking the other way is not an option.

Hollins cannot say she “did not know” about all the problems.

She knows, but continues to look the other way.