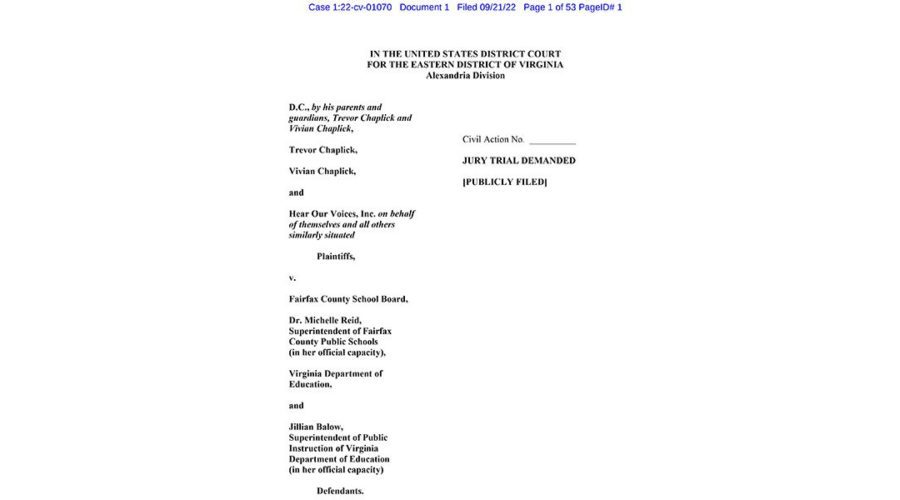 September 21, 2022, a federal class action lawsuit was filed against the Virginia Department of Education (VDOE) and Fairfax County School Board (FCSB), for violations of the rights of students under the U.S. Constitution and the Individuals with Disabilities Act (IDEA). The Civil Rights Clinic of Georgetown Law School, the law firm of Susman Godfrey, LLP (each working pro bono), and Merritt Law, PLLC, collaborated to develop and file the case.

According to the complaint, plaintiffs allege that the Virginia due process hearing officers are not impartial, but in fact, have the worst ruling record of any major state in the entire country with respect to parents who have brought claims under the IDEA.

The complaint states that the parents of D.C., the disabled child at the center of this lawsuit, experienced injustice firsthand in Virginia’s due process hearing system. Upon learning that their hearing officer had never ruled in favor of the parents in her entire 20 years as a hearing officer, the parents filed Freedom of Information Act (FOIA) requests. The data provided in the FOIA responses paint a portrait of a due process hearing system that is biased toward school districts.

For example, data included in the initial filing indicates that between 2010 and July 2021, 847 cases were filed in Virginia and only 13 ruled in favor of parents. That number decreases in Northern Virginia, indicating a greater favoring of schools over parents, with 395 cases filed during the same period and just three resulting in a ruling in favor of parents.

According to the plaintiff’s representatives, “In the past 20 years, parents in Virginia have won less than 2% of almost 1,400 due process cases brought under the IDEA—far below the 30 percent national average for parental success in IDEA cases.”

“We investigated the VDOE and brought this case for two basic reasons,” said Trevor Chaplick, D.C.’s father. “First, we want to shine a light on and reveal the deeply troubling ruling record of Virginia hearing officers against parents of disabled children in IDEA due process cases. We believe this is a scandal that has existed for at least twenty years. Second, we hope to make a difference for the disabled community through legal reform. We feel fortunate to be supported by a gifted legal team dedicated to these objectives. The parents of disabled and special needs children deserve a better fate from the Virginia public school system.”

“Children with disabilities and their families deserve ‘a life like yours,'” said Georgetown Civil Rights Clinic’s Director Aderson Francois. “This lawsuit is the first step in making sure that the Commonwealth of Virginia provides these children with an education that meets their needs.”

When asked about the class action lawsuit last night, during a speaking event at South County High School, FCPS Superintendent Michelle Reid declined to address a question about the case and said it was something for counsel to address.

More information can be found in the complaint (see document below) and via the nonprofit Hear Our Voices, Inc., which was created by Chaplick.