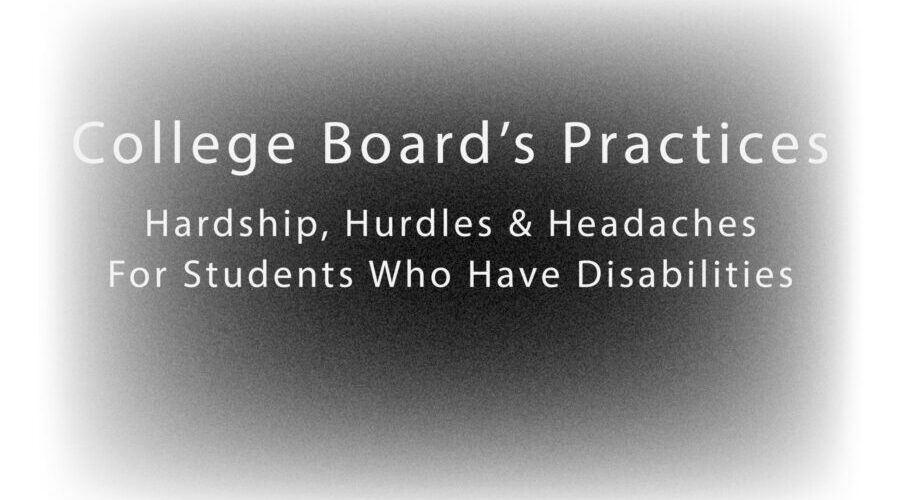 A student’s need for accommodations shouldn’t result in hardship, hurdles, and headaches — nor should it be the reason a student is put at a disadvantage.

However, this has happened in response to College Board’s practices.

The impact on students with two-day testing accommodations (as one example of accommodations) follows below, to illustrate some of the issues.

Students without two-day testing accommodations had the option of choosing the Saturday, August 28, 2021, test date and a testing center location.

Students with two-day testing accommodations were not allowed to choose the date or location of when and where they would take the SAT.

The SAT is administered on a Saturday, although there is an option for students to test on Sundays due to religious reasons.

College Board does not provide students with two-day testing accommodations the opportunity to test during the weekend.

Instead, these students and/or their parents must schedule two days of testing during the school day.

Until recently, College Board had a practice of allowing schools to test in one window. This year, it approved the option of schools testing during both windows.

However, finding out about the two windows and different options was like trying to that proverbial needle in a haystack. College Board staff don’t have the same knowledge base. One person told me that the two windows are new, due to COVID, and that there have never been two window options for the August administration of the exam. While other College Board staff said there was only one window and there’d only ever been one window, while another said there had been two windows for August in the past, but the schools could only test during one window.

Students with accommodations have to make up missed instruction, classwork and homework, because College Board doesn’t offer the opportunity for these students to test on a weekend, even though College Board admitted the ability to test on Saturdays and Sundays.

In addition, students miss functions at school, such as an opportunity to take part in a college programming at the school if the student is a junior or senior.

Doctors’ and other appointments that take place Monday–Friday have to be cancelled or delayed.

College Board has buttons on its site that allow students to print their admission ticket, which is required for students to take the exam.

For example, if you tried to print the ticket on August 29, 2021, for a student who was scheduled to take the exam August 30 and 31, 2021, you wouldn’t be able to print it, and thus would be at risk for not being able to take the SAT.

College Board’s Response: “We apologize for any inconvenience or frustrations this may have caused. The admission tickets are only available for all test takers until the administration date. Feedback and comments like yours are always welcome and allow us to improve.”

College Board does not keep the ticket admission button live for students who have accommodations, who have different administration dates.

The assumption is that College Board ensures that its test centers provide fully functioning computers on test day.

In my son’s case, Fairfax County Public Schools provided him a computer to use while testing.

The computer shut off for a “push” update and rebooted during the test, which in turn caused a 15-20 minute delay.

The proctor advised my son that the incident would have to be written up as an irregular testing incident and that we wouldn’t know if College Board would validate his test or invalidate his test. This resulted in my son being worried about the test being invalidated while he was in the process of taking the test.

College Board’s Response: “Please be advised we have escalated a case on your behalf for this concern regarding [Student’s] testing experience. The case is currently being investigated. . . . When a resolution has been reached you will be contacted directly.”

Delays: Sending the Test in for Scoring

Students without accommodations have their tests sent for scoring upon completion of the exam.

My son’s proctor told him, and then then College Board told me, that his test would not be sent to the College Board for scoring until after his school’s September 23rd testing window closed.

College Board’s Response: “The return policy is in place to protect the security of the exam. Please have the SSD Coordinator contact us again directly regarding your concerns.”

According to College Board’s site, September 10th is the score reporting date for exams taken August 28, 2021.

However, for students who have accommodations, who took the exam at their school, there is a delay. In my son’s case, his test won’t be sent to College Board until after August 28th test takers receive their scores.

College Board advised, too, that it would take four-to-six weeks for tests to be scored, which places the receipt of his scores in late October (as long as nothing else happens).

Lack of Opportunity to Obtain Test Questions to Study

If a student with accommodations wants to apply early for college, many of which have a November 1, 2021, deadline this year, the student will be lucky if he or she receives scores in time to submit for early acceptance, especially if they tested during the second window of the August 28, 2021, exam. Their peers, however, will receive their scores around September 10, 2021, and have plenty of time to plan.

This is one of the biggest issues of all.

If College Board has a question related to an accommodations request, rather than allowing an immediate answer to be provided, on which College Board could then provide an immediate or at least timely decision, College Board starts the clock ticking again, starting at day one of the next seven weeks.

For students with multiple accommodation needs, which require extra explanations and documentation, the process could take months to a year, especially since College Board asks that you call it if it exceeds the seven week timeline, putting the process of monitoring the timeline on parents and/or schools.

OCR recently advised me that College Board providing alternate test dates does fall under the regulation implementing Section 504 of the Rehabilitation Act of 1973, at 34 C.F.R. §104.4(b)(iv), which permits the provision of a separate aid, benefit or service when such action is necessary to provide a qualified person with a disability with aid, benefits, or services that are as effective as those provided to others.

Providing alternate dates is one thing.

It is altogether a different thing when College Board provides alternate dates that are tied to weeks of registration and scheduling hurdles; undue stress related to making up missed instruction, classwork, and homework; even more stress related to a computer rebooting in the middle of testing, not knowing if the test would be invalidated, and finishing the test while being nervous that the test would be invalidated; delays in submission and scoring of tests; and denials of opportunities to take part in services acceptable to students who don’t have accommodations.

Students who have disabilities, per the issues stated above, are not being provided aids, benefits, or services that are as equal or as effective as those provided to others.