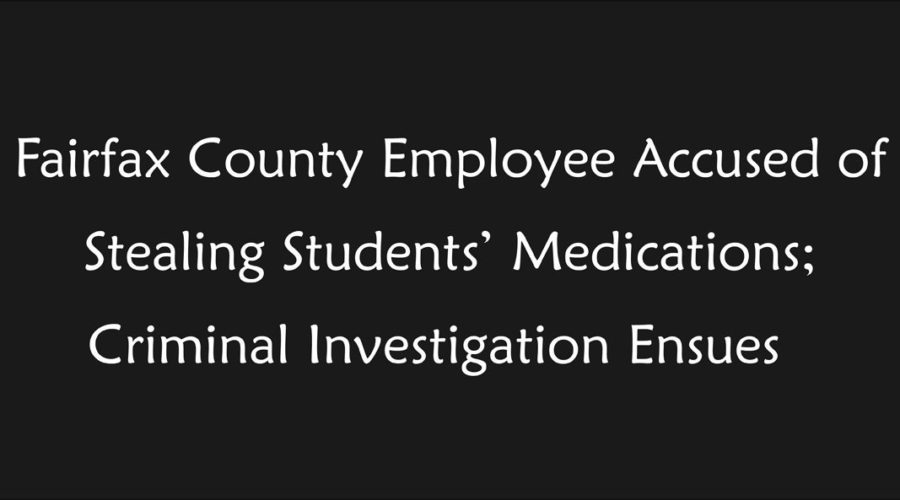 July 22, 2022: Article updated to include information about Jennifer Carpenter’s indictment, the police investigation, and the tip line set up in an attempt to gain more information related to the case.

June 10, 2022: Article updated to include FOIA response from Fairfax County Police Department and other cited documents.

Fairfax County Police Department (FCPD) and Fair Oaks Police Department (FOPD) are investigating Jennifer Carpenter regarding a “discrepancy in medication” that should have been administered to Fairfax County Public Schools (FCPS) students. Carpenter, a health department employee at Greenbriar East Elementary School (GEES), is accused of stealing medication such as Adderall and Ritalin, and instead administering an antihistamine to students.

In a May 31, 2022, letter, Fairfax County Health Department (FCHD) Director Gloria Addo-Aeynso advised the parents of one GEES student that Carpenter “may have on occasion given your child a generic over the counter antihistamine in lieu of her prescribed medication” and that “based on the information [FCHD] learned about the employee’s behavior and actions, we have placed the employee on administrative leave and are moving to terminate their employment with the county.”

In addition, Addo-Aeynso’s letter states, “We also made a report to the Fairfax County Police Department.” A June 10, 2022, FOIA response provided by the Fairfax County Police Department (FCPD) indicates that the health department reported a case of embezzlement and that the property reported stolen is medicine. FCPD’s report does not indicate that the health department filed an incident report focused on providing incorrect medicine to children or taking actions that harmed the mental, physical, and/or academic health of the children whose medicine was withheld.

After the mom sent an October 1, 2021, email to Carpenter, indicating that she wondered if her daughter simply forgot that Carpenter administered the medication, Carpenter responded, “Yes it can be hard to remember stuff at times!”

The student has executive functioning struggles and those struggles made it easy for Carpenter to push blame to the child, which in turn put the student in a precarious position.

Students who have special needs often struggle with depression and self confidence issues. Knowing they are different from classmates and feeling stupid and “less than” are difficult emotions to navigate. Imagine these children bearing the blame of adults, too.

Imagine knowing you didn’t receive your medication, but not being believed because you have a history of forgetfulness. Imagine knowing you are right and then second guessing yourself, or in some cases thinking you’re “crazy,” because school leadership and other adults keep blaming you. Imagine being told you’re to blame when the needs outlined in your 504 Plan or IEP aren’t addressed?

Unfortunately, this is an all-to-common scenario with Fairfax County staff — specifically those working within FCPS.

For example, during the 2020-21 school year, a student refused to communicate with his IEP case manager from October through the end of the school year. This refusal started after he watched the case manager provide false information during a due process hearing. When the parent complained about the student not receiving his services, FCPS blamed the parent and student for not cooperating.

Throughout the 2021-22 school year, the parents rang alarm bells related to their child not being administered her medication. One parent took to emailing Carpenter daily reminders to administer the medication, yet the problems continued and Carpenter provided false information related to the student being provided medication as prescribed.

Addo-Ayensu’s admission is another example of Fairfax County — specifically related to students — being slow to investigate and fast to provide false information.

In addition to having a history of blaming students for not accessing their services, FCPS has a history of providing false information regarding the full implementation of students’ IEPs and 504 Plans, and FCPS leadership has a history of refusing to investigate.

For example, after being found in noncompliance by the Virginia Department of Education (VDOE) and Virginia Hearing Officers, FCPS has failed to initiate investigations into staff taking actions that aren’t in the best interest of students.

For years FCPS proposed inappropriate reading programs for students who have Dyslexia, yet staff insisted the programs were appropriate and then vilified parents who pushed back.

In the earlier case, the teacher altered the hours he supposedly met with the student and inserted the student’s initials into a timechart, as if the student inserted the initials himself. After the parent identified the false information, SCHS held an IEP meeting, at which the teacher blamed Excel for autopopulating the timechart. Morris accepted the “autopopulating” excuse — and then the teacher went on to vilify the parent and to provide false and misleading testimony to the hearing officer during the hearing that followed, to include calling the parent physically violent during IEP meetings.

On another occasion, after VDOE found it in noncompliance, FCPS spent the next year trying to deny and/or cut related services needed in order for a student to access compensatory education owed to him. The United States Department of Education (USDOE) got involved after VDOE failed to ensure an appropriate corrective action plan was proposed and fully implemented by FCPS. The student lost years of access to his education, while FCPS invested money in lawyers and staff set on denying services.

Detectives are asking anyone with information about this case to please call 703-591-0966. Tips can also be submitted anonymously through Crime Solvers by phone – 1-866-411-TIPS (866-411-8477), and by web – Click HERE. Download the ‘P3 Tips’ App “Fairfax Co Crime Solvers”. Anonymous tipsters are eligible for cash rewards of $100 to $1,000 dollars. Please leave contact information if you wish for a detective to follow up with you.

One parent took her daughter to the pediatrician, concerned her daughter’s medication wasn’t working — and a parent considered holding his child back a year due to concerns with the child’s lack of progress.

Just as it tried to prevent public access to internal documents last year, FCPS is delaying access to a FOIA request related to the investigation, and choosing legal fees over transparency.

FCPS has exhibited a penchant for withholding findings of noncompliance. For example, for years FCPS has violated the privacy rights of parents and staff. Yet, FCPS has failed to advise parents and or the wider community of these issues.

As shared in Asra Nomani’s article, “EXCLUSIVE: Fairfax County health aide allegedly stole seven ‘kiddos’ drugs”, “Last week, [the parents] asked the principal and county health officials for four straightforward items: completion of the investigation, outcomes and reasoning, future processes, intentions to disseminate details and findings on the matter to the wider district and/or county.” Among other things, Wallin stated parents should contact the students’ doctors with any concerns. This came after the parent asked “what additional health screening the county would provide or recommend for the children impacted”.

Asra Nomani broke the story about Carpenter “diverting” student medication. Nomani is a senior fellow in the practice of journalism at Independent Women’s Network, has been a parent advocate in Fairfax County for two years, becoming an accidental activist when the school board started its campaign to eliminate the merit-based admissions test to Thomas Jefferson High School for Science and Technology.

A former Wall Street Journal reporter, she believes that transparency, like the kind we promote here, leads to better public policy.

Nomani learned about the scandal at Greenbriar East Elementary School from a parent. She spoke with Brett Byrnes who told his family’s story courageously and clearly. She spoke with another parent who wanted to remain anonymous.

“Fairfax County Public Schools is trying to punt its responsibility to the Fairfax County Health Department over this scandal at Greenbriar East Elementary School, but what happens under the roof of a school in the public school system is the responsibility of the school board, the superintendent and the administrators who run our schools,” she said.

“This alleged crime is so shocking because it represents an abuse of power against some of the most vulnerable in our community – children with disabilities. This alleged crime is another failure of Fairfax County Public Schools in realizing its most important mission: protecting children.”