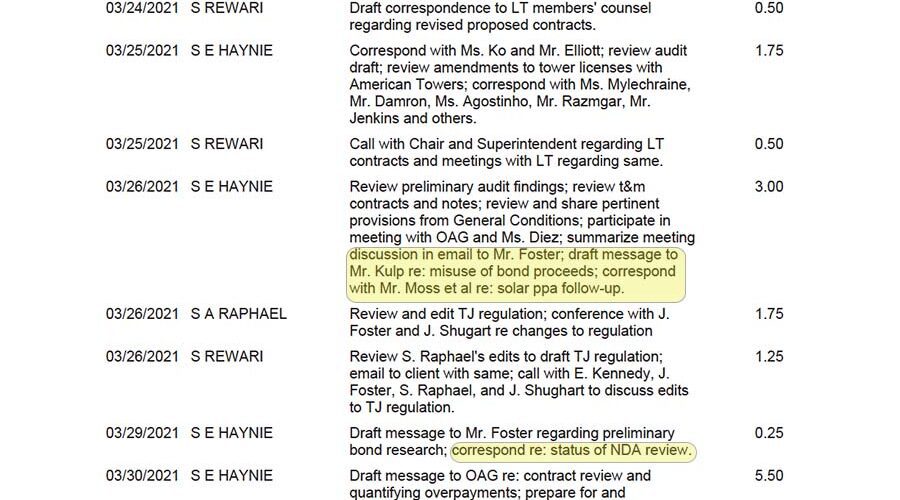 [This article was first published September 29, 2021. September 30, 2021, a Fairfax County Judge ordered that Debra Tisler and I not disseminate the materials she received in response to a FOIA request. I took down the article, which included documents from the FOIA response. This came after Fairfax County School Board (FCSB) took legal action against me and Debra. Today, November 16, 2021, after over a month of Debra and I being censored, Judge Richard Gardiner struck down FCSB’s unconstitutional attempts to shut down our speech. Hence, this article is live again. Not exactly a breach of children’s or personnel privacy as FCSB tried to indicate, is it?]

A May 13, 2021, Hunton Andrews Kurth invoice notes that attorney SE Haynie ($395 rate) drafted a message “re: misuse of bond proceeds” and later there’s a mention of Haynie corresponding “re: status of NDA review.”

AND: why is $395/hour being put toward writing a message. Is this not something FCPS’s in-house counsel can handle?

Per the NDA agreement, just color me curious on that one.

(Thank you to fellow FCPS parent Debra Tisler who did the FOIA request that made sharing this information possible. An extra thank you to her for pointing out the “misuse of bond proceeds” on this invoice.)

Click on the image below to view the invoice page noted above.