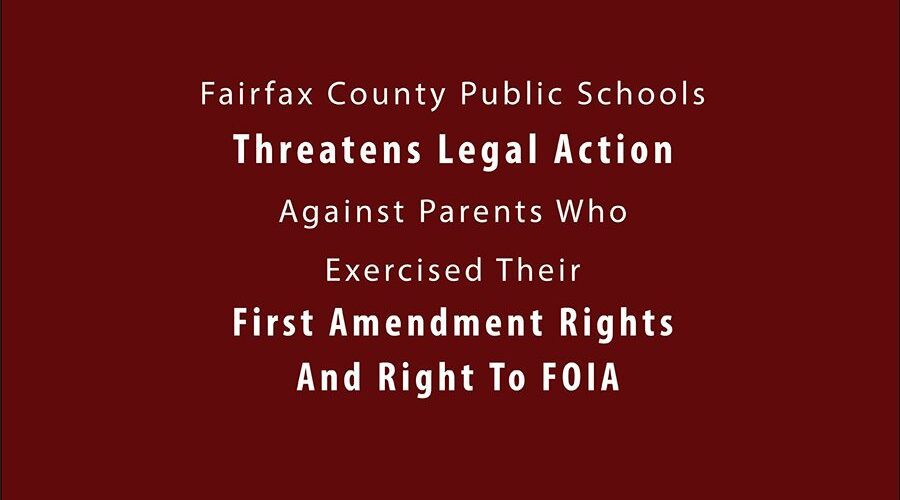 Fairfax County Public Schools (FCPS) has threatened legal action against parents Debra Tisler and yours truly, Callie Oettinger, in response to us exercising our first amendment rights and right to FOIA.

What did we do?

We shared a behind-the-scenes view that indicates FCPS is aware of the very issues parents have been concerned about for years. (As well as HIPAA failures, stolen credentials, negotiations to extend Scott Brabrand’s contract, the investigations into the cyber hacking and Blackboard failures, wastes of funds, and much more.)

Improper Prior Restraint Under the First Amendment

In response to a FOIA request submitted and paid for by Debra, FCPS provided her almost 1500 pages of documents. Debra shared the documents with me and contacted advocates in the area, such as Coalition for TJ, and I shared a story about the release of the documents and shared some of the documents on this site (after I redacted them). See: Fairfax County Public Schools Leaked Its Own Legal Invoices

FCPS responded to us exercising our First Amendment Rights by 1) repeatedly sending someone to our homes who scared our families and damaged property and 2) threatening to take legal action if we didn’t a) return the documents, b) stop sharing the documents and/or information about the documents, and c) tell FCPS the individuals with whom we shared the documents. In my case, I was ordered to remove my article from this site and to remove online postings.

FCPS asking us to return records that were legally obtained is essentially an improper prior restraint under First Amendment law.

We have something called First Amendment Rights in this country, so keeping quiet about information we viewed to be a problem wasn’t an option. Plus, Virginia has anti-SLAPP laws.

It’s a bit pot calling the kettle black when the school system whose own internal audit found major problems with it tries to demand something of the very parents who have been pointing out FCPS’s problems to it for years. FCPS didn’t need to pay for an expensive audit (one that failed to address all students with special education needs by the way). It could have simply asked me, Debra, or any of a number of other parents. See: Just In: FCPS “Independent” Special Education Audit Reveals Disturbing Data

In regard to FCPS’s demand that I remove the documents and information about the documents from my site, there are at least three Supreme Court decisions holding that a publisher who did nothing illegal to obtain confidential information, cannot be punished for disseminating it. This is so even if a government entity  disclosed the information in violation of law.

Since 2017, FCPS has violated my family’s privacy about a dozen times; has provided me personally identifiable information (PII) about over a thousand students, parents, and family members; and has provided PII to other parents about students who are not their own. See: FERPA Violation Report Card: Fairfax County Public Schools

The Virginia Department of Education (VDOE) has found FCPS in noncompliance on numerous occasions — yet the noncompliance has continued.

In the year since I launched this site, I have shared information about FCPS’s repeat breaches over and over.

At no point has FCPS threatened legal action against individuals to whom it gave my family’s information without our consent.

At no point has FCPS threatened legal action against me to stop sharing previous breeches.

Yet . . . Now all of a sudden, FCPS is threatening legal action, which makes me wonder if this isn’t about privacy breaches, but perhaps about some of the questionable information in the documents.

Debra submitted a Freedom of Information Act (FOIA) request to FCPS for the following:

Sept 10, 2021: Molly emailed Debra a link to the first set of records that were responsive to Debra’s request and Debra shared the link with me. In the email she specifically advised Debra of the following:

Responsive record set 1 is being transmitted via Drobox at the link below. Please download a copy of the records for your use. Please note that the Dropbox link to the records will expire 60 days from September 10, 2021. Please be advised that records were redacted in part pursuant to Va. Code § 2.2-3705.1(2) (attorney client privileged communications.)

September 13, 2021: Molly again emailed Debra, this time with a second link, which Debra again shared with me. She advised of the following:

A second production was finalized this morning and is being provided to you via the Dropbox link below.

September 24, 2021: I posted the article “Fairfax County Public Schools Leaked Its Own Legal Invoices” to this site.

In addition I continued to contact the parents, teachers, and lawyers that I could track down, who were mentioned in the documents. Debra reached out as well. We both believe that people whose information has been breached should be made aware of the breach.

Although the documents had been released two weeks prior, none of the individuals with whom we spoke had been contacted by FCPS about the breach.

September 25, 2021: Someone came to my home and started banging on my door. I was in the bathroom and stepped out in time to see the car drive up my pipestem driveway when I was walking downstairs. I thought it was an overly aggressive Amazon delivery person, finished walking downstairs, looked out the window and didn’t see anything on our steps. Later that day, someone started banging again. Again, I didn’t make it to the door in time to open it, but I saw the same car. That’s when I started thinking we were being harassed.

September 26, 2021: Debra and I filed a joint state complaint to the Virginia Department of Education (VDOE) requesting that VDOE investigate FCPS for noncompliance related to FERPA regulations, and that it specifically initiate a systemic investigation related to FERPA violations. We forwarded VDOE both of the files that FCPS provided to Debra.

Later that day, my daughter was home alone when a “scary man” started banging on the door. She ran up to her bedroom and started recording him and called me. She said he was banging, looking in windows, and taking pictures of our home. I raced home and called the police after I saw her video. I called the police because I recognized the car. It was the same car from the day before.

My daughter got the guy’s tags and the police ran the tags. I explained to the police what I thought was occurring. I was advised by the policeman that I have a right to say whatever I want, that I wasn’t doing anything wrong. He said, too, that if we found anything in the documents that should be investigated, that we should bring it to the police station so that it could be given to a detective for investigation.

I contacted Debra and described the car and the man in the video and she said she had seen it, too, hanging around her home. She doesn’t use her front door often either and she too found a letter.

We both contacted elected officials and journalists to make them aware of what was occurring.

September 27, 2018: In addition to our efforts to continue to track down individuals in the documents and make them aware of the breach, I spoke with the Fairfax County Federation of Teachers (FCFT) and expressed my concerns that FCPS had shared extraordinarily sensitive information about FCPS teachers, to include grievances they filed, investigations into them, and dismissals.

That evening I found a phone message from Ryan Bates who called me Sunday at 4:58 pm and left a message for me to call him.

FCPS has yet to answer my emails on how it will ensure my son’s computer doesn’t shut down on him when he takes the SAT exam again, yet Ryan Bates wanted me to call him immediately on a Sunday evening. See: FCPS Tech Problems Continue: FCPS Computer Shuts Down During SAT Exam, Fairfax County Public Schools Isn’t Able To Prevent Student Computers From Shutting Down, and College Board’s Practices: Hardships, Hurdles & Headaches For Students Who Have Disabilities

Why aren’t my children or the children of other parents such a priority? Who is making phone calls at 5 pm on a Sunday to help FCPS’s children?

September 28, 2021: Debra and I contacted VDOE and requested that our state complaint be amended to include retaliation from FCPS. We’d done nothing wrong in exercising or First Amendment Rights, or in sharing a FOIA response that FCPS itself stated was in response to the FOIA request submitted by Debra.

Later in the day Debra and I found out someone posted all of the documents to Fairfax Underground – without any redactions. That’s when the emails started again, with us wanting to let people know that someone – not us – had released the information.

I’m sick to my stomach as I type this, because I know what it is to have my family’s information released.

All we’ve tried to do is make people aware of the breaches and the questionable information in the documents.

Late afternoon, Luke Rosiak, a journalist with whom Debra had been working, posted an article he wrote about the documents and what Debra had been experiencing. See: McAuliffe-Linked Law Firm Billed $700 An Hour Fighting Parents Of Special-Needs Children

These two nuggets from memorandum jumped out at me:

The School Board faces a high risk of irreparable harm if the injunction is not granted.

The public interest favors entry of an injunction.

You know who has faced irreparable harm?

All of the children FCPS has failed year after year.

Let’s look at the kids who have endured restraint and seclusion. Where was FCPS when those children needed help? Where was FCPS when students were harassed and desperately needed adults who could stand up and help them. (Can you say “Lake Braddock”? See: Feds investigating Virginia school after sex harassment complaints against coach)

If this was about breaching the privacy of students and staff, why hasn’t FCPS gone after other people so aggressively on behalf of my son and other students?

When FCPS violated the privacy of the Tisler family and provided a transcript of their due process hearing to — wait for it — me, why didn’t FCPS make them aware of the breach?

Why didn’t FCPS aggressively address the teacher who — in one week — breached my son’s privacy twice and then emailed private info about him to her personal email account (also a no-no).

Where was FCPS when one of its schools violated my family’s privacy four times in four months?

I could give you many more examples.