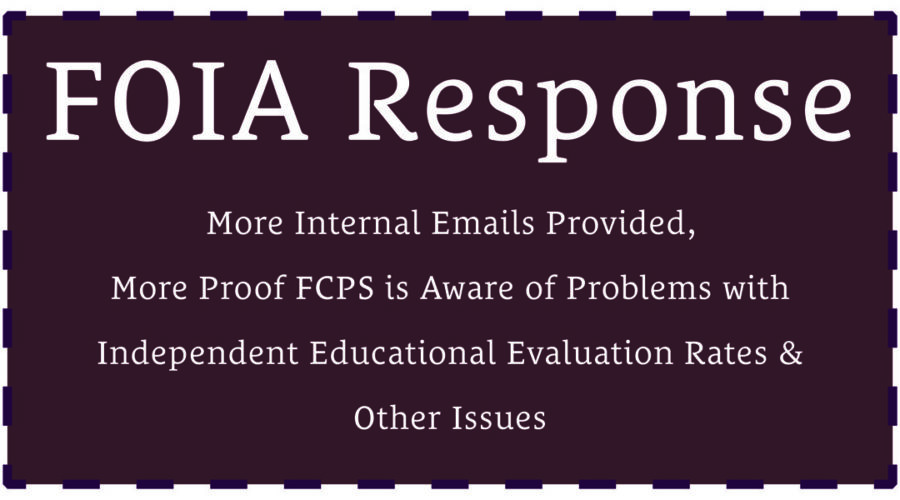 July 26, 2022, Fairfax County Public Schools (FCPS) provided its response to another FOIA request, this one focused on staff correspondence over a few days in May 2022.

Although numerous parents through the years have complained to FCPS and/or have filed state complaints about the rates, FCPS has refused to change them.

Yet, in a May 6, 2022, Dawn Schaefer, acting director of FCPS’s office of special education procedural support, cited those state complaints as one of the reasons finally to make the change. In an email to FCPS staff, she stated the following:

We had discussed IEE rate setting in light of the changes to the VDOE special education regulations, JLARC report, and a couple of state complaint findings. I had talked with Dr. Brabrand and the leadership team about it in December, and shared that we would be undertaking rate setting this spring. OSEPS has done so, and has also consulted with counsel, Finance, and DSS Finance regarding the process, findings, and implications going forward.

The changes to VDOE Regulations were required by the 2020 U.S. Department of Education (USDOE), after it released a critical report of VDOE, to include the fact that Virginia’s IEE regulations were in noncompliance with federal regulations.

Initially, FCPS refused to implement USDOE’s required changes. This resulted in a state complaint being filed against FCPS and in VDOE finding FCPS in noncompliance.

Like USDOE’s report, JLARC’s reports were released in 2020 and were critical of VDOE. December of 2020, JLARC released the report titled K-12 Special Education in Virginia.

Click on the image below to view the IEE-related pages of the 7.26.22 FOIA response.

Click on the image below to view the entire 7.26.22 FOIA Response