How to File an Office of Civil Rights Complaint 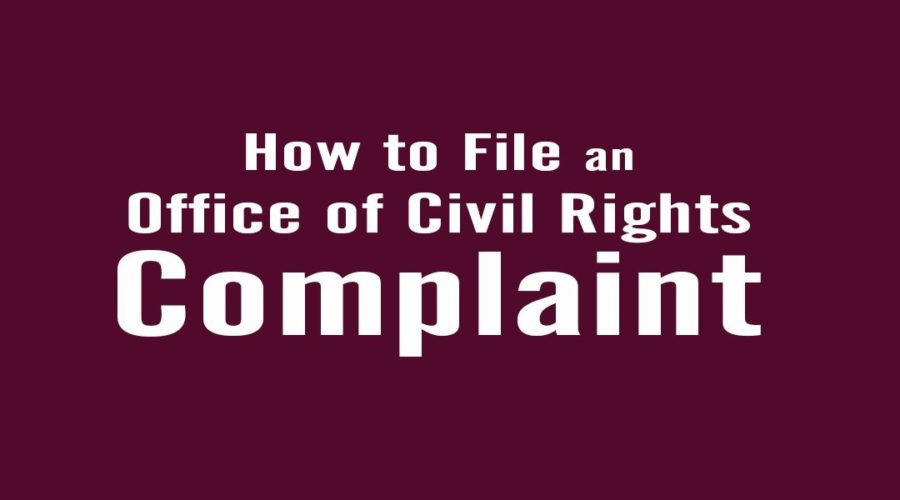 How to File an Office of Civil Rights Complaint

In addition, OCR has the authority to investigate complaints that claim covered entities did the following:

The following is a Q&A pulled from OCR’s site, which provides OCR’s comments about the complaint submission process. I’ve added my two cents based on personal experiences filing complaints with OCR.

What is the Timeline for Complaints?

By law, complaints of discrimination must ordinarily be filed within 180 days of the last act of discrimination. If your complaint involves matters that occurred longer ago than this and you are requesting a waiver, you will be asked to show good cause why you did not file your complaint within the 180-day period. . . . There are certain limited circumstances that allow our agency to grant a waiver. If you need more information about your situation, contact the OCR enforcement office responsible for the state in which the institution is located.

OCR is strict when it comes to the 180-day period. However, it has shown that it will go back and look at events that occurred beyond a 180-day period, so it’s worth a shot. For example, January 12, 2021, OCR announced it would open an investigation into Fairfax County Public Schools’ (FCPS) COVID practice, to include practices that fell outside the 180-day period. When OCR released its findings November 30, 2022, its letter of findings covered a period of over two years between 2020 and 2022.

How do I file a complaint of discrimination with OCR?

Due to COVID closures and the fact that staff haven’t returned to the office in full, OCR has experienced delays between the arrival of mail and when it is addressed. OCR is known for delayed responses and investigations as is, so relying on USPS and in-office staff could lead to additional delays. As of the date of the publication of this article, OCR’s site still indicates that online submissions are its preference, too:

After you submit the form, OCR’s automated system typically submits an email to you, with a link for a consent form that you MUST fill out and submit to OCR or have it filled out on behalf of the individual for whom you’re filing (if the individual is over 18 years old).

*December 3, 2022, between 8 AM and 9 PM, OCR’s online submission form will be down due to maintenance. OCR has advised that “complainants will be unable to file complaints online at this time however, they may still file complaints by email/mail using the Fillable PDF Complaint Form.”

What questions will OCR ask me?

What do I need to include in my complaint?

You should let us know which school, college or other institution you are complaining about, the person(s) who has been discriminated against, when the discrimination occurred, and you should sign and date the form or letter and let us know how we can reach you by phone, e-mail, and letter so that we can contact you. If filing electronically or on-line, you will still need to provide an original signature by mail, which may be done by printing and mailing a “Consent Form” linked from the bottom of the on-line complaint form.

Pull together a timeline to provide OCR the dates on which the discrimination occurred. Be specific with details, but beware of including the kitchen sink. “Brief” and “to the point” are your friends.

How promptly will OCR respond to my complaint?

OCR will promptly acknowledge receiving your complaint and will contact you by letter, e-mail, or telephone to let you know whether we will proceed further with your complaint.

“Prompt” is not a word I’d associate with any of OCR’s communications. OCR’s communication in regard to complaints is more turtle than hare. For example, on April 12. 2021, OCR contacted me about opening an investigation into a complaint I filed a year and a half earlier, on October 15, 2019. Eventually they’ll reply, so you need to follow up with them. Don’t wait for OCR to respond to you.

I suggest emailing them after your file your complaint and attach a PDF of what you filed. This can be emailed to the following address: OCR@ed.gov. In addition, consider following up with whomever eventually responds on a regular basis.

What is OCR’s role during the complaint process?

OCR’s role is to be a neutral fact-finder and to promptly resolve complaints. OCR has a variety of options for resolving complaints, including facilitated resolutions and investigations. OCR does not act as an advocate for either party during the process.

As mentioned previously, “prompt” is not a word I’d associate with OCR. In the case of the 2019 complaint I mentioned above (which OCR opened in 2021), I provided OCR with an admission of guilt from FCPS, yet another year has passed and OCR has yet to release its findings. In this case, FCPS accidentally included a parent on an email chain in which FCPS 1) admitted fault and 2) discussed meeting to address the fault. The parent provided me the email chain and I forwarded it to OCR. Given OCR has a written admission from FCPS in hand, I don’t know why another year has passed without OCR closing out the complaint. Again: “Prompt” is not a word I’d pair with OCR.

What if I am already pursuing my complaint within the school district or college or with another agency?

OCR does not handle cases that are being addressed by another agency or within a school’s or college’s formal grievance procedure if OCR anticipates that the school or college, or agency you filed with will provide you with a resolution process comparable to OCR’s. Once the other complaint process is completed, you have 60 days to file your complaint with OCR. OCR’s first step will be to determine whether to defer to the result reached in the other process.

OCR will absolutely not investigate your case if it is being addressed elsewhere, to include circuit or federal court. In 2021, FCPS sued me and Debra Tisler after 1) Debra legally obtained a FOIA response from FCPS and 2) I published the information after first redacting it. FCPS 1) released a statement that led the public to believe I published private information about students and 2) filed a lawsuit against me and Debra. The lawsuit was a straight case of prior restraint, which FCPS should never have filed, but it went on to spend over $300,000+ to fight us anyway—and lost. As this was unfolding, I contacted OCR to file a complaint about FCPS retaliating against us, just because, in the course of our advocacy, I published legal records that FCPS evidently didn’t mean to share (at least not without a few thousand additional redactions being added first) and did not want published. OCR found out that the case was in circuit court and refused to investigate.

Do I have to file an OCR complaint before I can file a claim in court?

The regulations under Title VI, Title IX, Section 504 and Title II do not require you to file with OCR prior to filing a claim under these laws in Federal court. The regulations under the Age Discrimination Act, however, allow you to file a claim in Federal court under that law only after: 1) 180 days have elapsed since you filed the complaint with OCR and OCR has made no finding, or 2) OCR issues a finding in favor of the recipient. If this occurs, OCR will promptly notify you and remind you of your right to file in court.

If you are considering filing in court, bear in mind that OCR does not represent complaining parties or provide advice regarding court filings. You would need to use the services of your own attorney. Also, if you proceed with your claim in a court, OCR will not continue to pursue your OCR complaint.

For more information you may refer to What to Expect from OCR and the OCR Case Processing Manual (CPM).

OCR is not prompt. However, when they investigate, they actually do a more thorough investigation than state agencies like the Virginia Department of Education. My course has been to try to submit an issue as a state complaint (if it falls under the areas covered by state complaints) and then file under OCR. I file with OCR first if I know it won’t be addressed by VDOE.