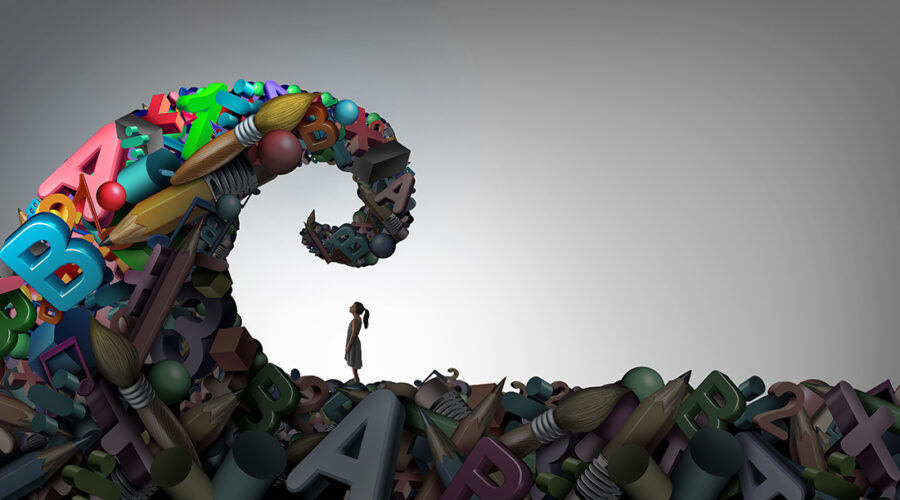 Learning disability concept and dyslexia or ADHD disorder symbol or attention deficit and school anxiety or stress with math and reading or writing with 3D illustration elements.

This article applies to all the parents of all the students nationwide who were given the program Language Live, even though the examples below pull from Fairfax County Public Schools (FCPS) in Virginia.

Language Live is a program that school divisions license from the company Voyager Sopris. FCPS uses Language Live as a tier 3 “comprehensive specialized reading program” for students with Dyslexia.

We are having training tomorrow and I want to make sure we are using the correct placement chart.

The new teacher guide placement chart (page 142) is different from the placement recommendations chart you gave via email. We assume the one you gave via email trumps the one in the book, correct? The difference is that the newest doesn’t ever place students in to Level 2 Unit 7. Do you have an understanding of why? Teachers are asking…

From editorials: After we got some initial feedback and data from past implementations, it became clear that if students needed Level 2, they needed all of it. Those students who would have placed in the second
part of the level really didn’t need an intervention like LL and could perform pretty well in their core. Thus, we now only have 3 entry points for new students: L1U1, L1U5 and L2U1.

Students became data points instead of having their unique needs appropriately addressed.

The publishing company itself collected data from past interventions, stating that students who started Language Live at Level 2, Unit 7 (L2U7), “didn’t need an intervention like LL” or needed all of Level 2.

In any other organization, if a vendor told a customer—after the fact—that the product bought didn’t actually work as advised it would, that something needed to be changed, should have been given differently, and so on, it would be expected that the customer would request a refund and/or credit of some sort. In this case, we’re talking about children, not toasters. If I bought a toaster and it didn’t work, I’d return it and ask for another toaster or my money back. Doesn’t work that way for a student.

None of the students who became data points can get their lives back. There is no year or two or three that can be returned to them. Instead, time isn’t a luxury, it is something they have too little of, as they grow older without having their unique needs addressed.

My son was one of the students who was started at L2U7. He took it as a year-long elective during the 2016-17 school year, at the recommendation of FCPS. He regressed during that year and, per Theresa’s comments, there’s a good change that he became one of those data points to which she referred.

As a tax payer, I want to know if FCPS asked for money back and/or asked for credits.

As a parent, I want to know how students who lost a year of their lives—a year they didn’t have time to waste—will be compensated.

To date, FCPS hasn’t advised me what it has done to address this with a company to whom it has paid over $500,000, and with whom it continues to contract.

If your child has an education program that calls for intervention, and a program such as Language Live, the school division is in noncompliance each time the child isn’t able to access the program.

In addition to the “data points” information shared by Theresa, my son spent the year telling me of problems with the program, of not being able to access it during class. FOIA requests indicate that problems existed during the 2017-18 school year, which align with what my son shared during the 2016-17 school year. (see emails below).