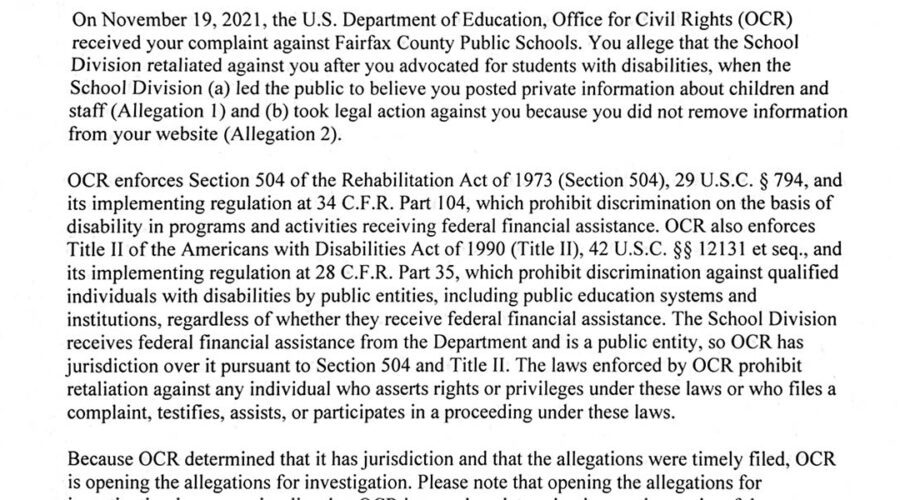 Fairfax County Public Schools (FCPS) is again the focus of an investigation by the United States Department of Education’s (USDOE) Office of Civil Rights (OCR).

January 27, 2022, OCR issued a letter announcing the opening of the investigation, which focuses on retaliatory actions.

To view OCR’s letter in full, click on the image below.

FCPS (a.k.a Fairfax County School Board when it comes to litigation) sued two parents after they advocated for students who have disabilities and after the parents shared legally-obtained FCPS legal invoices that, among other things, provide additional proof that problems with special education exist, that waste of funds is widespread, that operational failures exist throughout the county, and that there’s an assistant United States attorney involved in a special investigation with FCPS. FCPS provided the 1,316 pages of legal invoices to one of the parents in response to her FOIA request and advised the parent that 1) the documents had been redacted and 2) she should download the documents before the link expired.

National news outlets got wind of the lawsuit and FCPS’s response was to release a statement to media outlets, which led the public to believe that the parents published personally identifiable (PII) information about children and school personnel online.

On the final day of the hearing, Judge Richard E. Gardiner ruled in favor of the parents and made the following statements [emphasis added]:

“The Board argues vociferously that this is not a prior restraint. I equally vociferously disagree with that. This is about as much a prior restraint as there ever could be. The Board is coming to a government agency, the Court, that has the power to restrain and asking the Court to restrain the defendants in this case. So this is a prior restraint. No question about it, in my mind. And that means that we’re governed by several cases from the U.S. Supreme Court, the most recent or the most applicable, I would say, is the Supreme Court decision in the Florida Star versus BJF, which is 491 U.S. 524 from 1989. And the standard set out there — the first question that one has to ask in a prior restraint case is whether the publisher — in that case, it was a newspaper; in this case, it’s two individual citizens — lawfully obtained truthful information about a matter of public significance. In my view, in this case, the publishers did lawfully obtain truthful information. They made a Freedom of Information Act request. The Board’s designee or the Board’s employee — I’m not exactly sure what the relationship was, whether it was employee or somebody else, but in any case, their agent — the Board’s agent released the information in response to the Freedom of Information Act request. The information wasn’t stolen or otherwise unlawfully obtained. It was obtained quite lawfully, and it’s clearly also about a matter of public significance because this has to do with legal bills that are being paid by the taxpayers of Fairfax County. And while it’s not a matter of something like the Pentagon papers where we’re talking about the war in Vietnam, certainly it’s a matter of public significance as to what the taxpayers — what bills the taxpayers are having to absorb.”

And, in this case, the State interest of the highest order would be information relating to personal privacy, and, therefore, it is the Court’s view that the Board is not likely to succeed in this case with regard to virtually everything that was not redacted. The only thing that I think the board has any likelihood of success on is information concerning bank account names and numbers and tax IDs and federal IDs to the extent those are in there. Everything else — and I went through every single redaction here. Everything else here is not, the Court finds, within the zone of personal privacy. Even information as to routing numbers, which are public information and SWIFT codes are not within the realm of personal privacy. You can look up a routing number and a SWIFT code on the internet for any bank — probably any bank in the world but certainly any bank in the United States. And — but the information — other information that’s in — that was redacted does not come within the zone of personal privacy.

In addition, the Board’s argument about attorney-client privilege and work product, at this stage, is really — is irrelevant in the – because, in the Court’s view, both the attorney-client privilege and any work product privilege there might be has been waived by the client by releasing the information. Now, the Board makes what I think to be almost a frivolous argument when they say, Well, it wasn’t the individual board members who made the decision; it was their — it was an employee or their agent. But that, in my view, makes absolutely no difference at all. They were the ones — the Board were the ones who gave that duty to that person, and they are bound by what that employee did. So I find that, as to any attorney-client privilege or work product privilege that may be claimed that that has been waived and that, therefore, any information dealing with that is — the board is not likely to succeed on the merits of keeping that information — requiring that information to be restrained.

After Judge Gardiner made his ruling, FCPS’s response was to release another statement leading the public to believe the parents had and would publish personally identifiable information about children and staff personnel files.

The government does not have the right to retaliate against us, to lie about us, to try to intimidate us, to take actions that harm our children or us, or do anything else under the umbrella of “retaliation” just because we dare to speak the truth, to advocate for ourselves and others, and to create the change that’s needed.