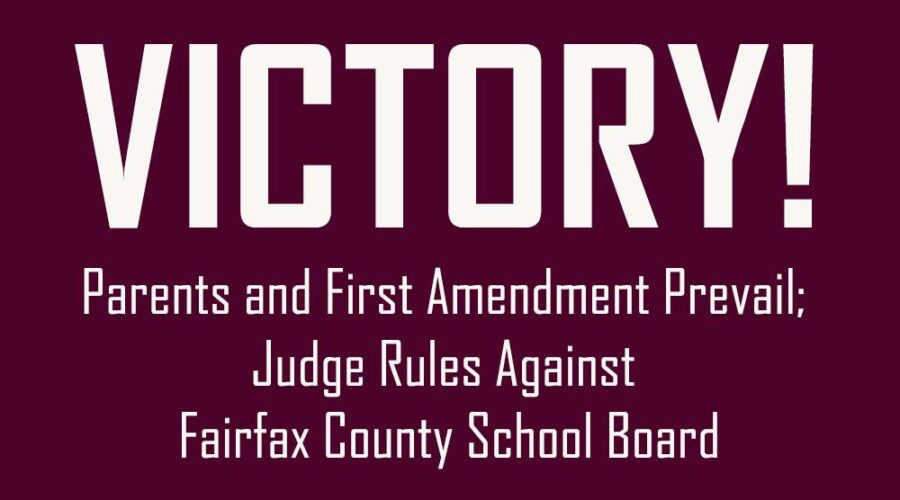 Today, Debra Tisler and I prevailed in court when Judge Richard E. Gardiner ruled against Fairfax County School Board’s (FCSB) legal actions against us. It was an extraordinary day for Freedom of Speech and First Amendment Rights—and for parents who dare to point out waste and noncompliance.

We had the honor of being represented by Timothy Sandefur of the Goldwater Institute and Ketan Bhirud of Troutman Pepper. It was extraordinary to witness the dedication and passion of these two lawyers.

While FCSB’s lawyers made arguments that the court called “almost frivolous”, Tim and Ketan stood up for Freedom of Speech and First Amendment Rights, and in turn for me and for Debra.

Prior Restraint & Waste of Funds

During today’s hearing, Judge Gardiner stated that the school board’s actions were “about as much a prior restraint as there ever could be.” FCPS and the school board should have known this, yet instead they moved forward with legal actions that involved multiple $695/hour attorneys.

FCPS responded to us exercising our First Amendment Rights by 1) repeatedly sending someone to our homes who scared our families and damaged property and 2) threatening to take legal action if we didn’t a) return the documents, b) stop sharing the documents and/or information about the documents, and c) tell FCPS the individuals with whom we shared the documents. In my case, I was ordered to remove my article from this site and to remove online postings.

FCPS asking us to return records that were legally obtained is essentially an improper prior restraint under First Amendment law.

We have something called First Amendment Rights in this country, so keeping quiet about information we viewed to be a problem wasn’t an option. Plus, Virginia has anti-SLAPP laws.

FCPS invested more money into a law firm to which it has a history of paying over $200,000 about every other week for a long period.

In response to the national press contacting FCPS about the case, FCPS’s spokesperson Julie Moult released the following statement:

“The two residents refused to stop disseminating the material about other parents’ children and individual employees, so we were forced to seek the court’s intervention. Being a taxpayer doesn’t give one the right to publish private information about other people’s kids,” the spokesperson added.”

I’ve never published personally identifiable information about “other people’s kids”, and yet . . .

FCPS released a statement that was followed by me receiving hate mail, having strange individuals lingering around my home and driving down my pipestem driveway, and having what is now an online footprint indicating Debra and I have gone around publishing publicly identifiable information about children.

What’s interesting — and laughable — is that Julie Moult released this statement, too:

FCPS staff, from central office employees to teachers, have been breaching the privacy of students and staff for years. If FCPS took privacy seriously and tried “its hardest every day” the breaches wouldn’t continue to happen. (Read: “FCPS Office of Special Education Procedural Support Has a History of Privacy Breaches” and “FERPA Violation Report Card: Fairfax County Public Schools“

Making her statements even more absurd is the following statement she released in June of this year, following a yet a different breach:

“FCPS is in the process of tightening its processes and increasing training opportunities in the handling  of data to ensure this cannot happen again.”

Imagine if FCPS was as prolific at educating students as it is at breaching the privacy of its staff and students. FCPS students might just receive a world-class education instead of living in a county with mind-boggling legal bills, and FCPS teachers might receive the support and training they need.