Recommended Reading: Anything by John Holt 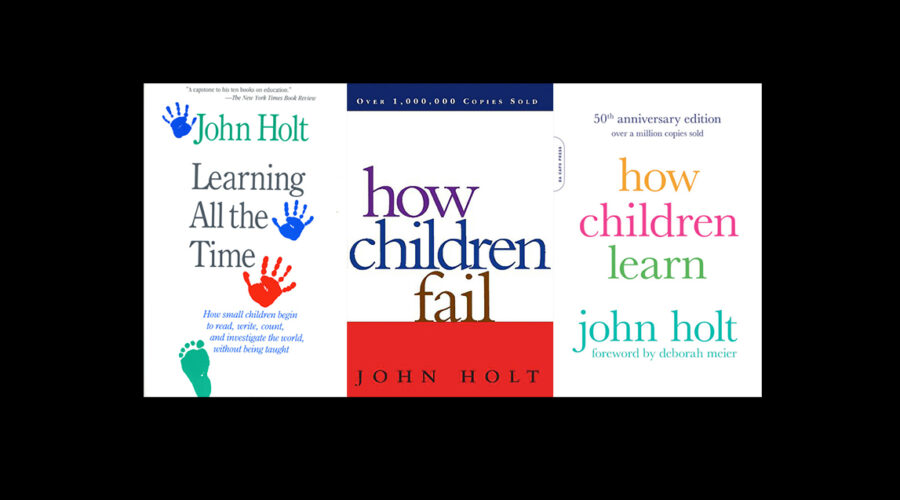 Recommended Reading: Anything by John Holt

I ran into John Holt in a college “Conflict and Negotiation” class. His book Learning All the Time sat atop a classmate’s satchel, and I found myself straining to see the title of the book with all the colorful handprints. As the class ticked by, and the classmate bumped the bag here and there, the book inched out of its nesting spot and onto the floor.

I was a senior, about to graduate with a B.F.A. in creative writing, and going through a self-doubting period of Can I really do this? Can I make a living writing or in publishing? Or will I be another college student who never uses her degree, who looks back at college years later, desperately trying to remember it, but doing no better than when trying to remember a fading dream?

And in this period, I thought of becoming a reading teacher, of at least being around words and pushing them forward, of gifting the joy of reading to children. If I couldn’t support myself with words, maybe I could make a career of helping children.

So . . . When Learning All the Time slipped to the floor near my desk, I picked it up and flipped through it before returning it to the classmate who hadn’t even noticed its departure. The class was a graduate level class and the book was for his wife, who’d asked him to buy it for a class she was taking. I asked if I could borrow it when she was done. A few weeks later, he brought it back to class. I never returned it. Still sits in a prominent position on my shelf today.

Soon after, I ended up in a small publishing house and went from junior editor to senior editor within a few months. I had no business doing the job, but the publisher saw a hardworker, knew I would work for the starting rate of $16,000 a year, with no benefits, and was ready to say goodbye to the senior editor with whom his relationship was souring.

And then walked in Bob Danzig, former 25+ years head of The Hearst Corporation and VP of The Hearst Newspaper Group. We became friends and he took me under his wing. Bob had grown up in the foster care system and the pain stayed with him. He wanted to help other children.

John Holt entered my life again and I found myself re-reading his books, mining them for ideas to help Bob as he moved forward on his own mission to help children.

And then the books sat on my shelf and collected dust.

Life became busy. I married, had two kids, my own business . . . Little time for anything else.

And then my kids entered school and John’s words floated in and out of my brain, but by then I was underwater, struggling to understand Dyslexia, struggling to understand why what had always been so easy for me was so hard for my child—and I was consumed with anger toward the school system and myself. Why hadn’t I pushed harder when he was younger? Why didn’t I push back when they said boys read later? Why did I believe them when they said he had to be two years behind before they could help. Why did I believe they even knew what they were doing?

Not long ago, I returned to the books, still on my shelves, and found them speaking to me just as they did all those years ago, and found myself regretting I had slid their messages to the side to make room in my head for everything new I was trying to learn. What follows are a few quotes and examples from John’s books, which still speak to me and which might, perhaps, resonate with you, too.

So often, I have spoken with teachers and they’ve said, “Well, if he didn’t understand, he should have said something.” My response: You don’t know what you don’t know. For some kids, they need information, especially directions repeated. In John Holt’s words, from How Children Fail:

Comprehension is a huge issue with struggling readers. A child with Dyslexia might have an easier time with the vocabulary of a book about basketball because he can imagine the words in his mind. The words that are harder live outside his world. There’s a great story about Charles Schwab (of course I can’t find the exact quote now), but it is along the lines of him being an avid reader of business news, but he had been bringing the same book along on vacation for ten years and still hadn’t made it through it. If you can visualize the word, it is easier to deposit it in the work bank in your mind. But, if the words aren’t even similar to those in your bank, it is a struggle that impacts both reading and listening comprehension. Schwab is fluent in the language of business, so reading business news doesn’t present the struggle of reading a fiction book. In John Holt’s words, from Learning All the Time:

Another hurdle to understanding is to hear one thing and then another that seems to contradict the first. If you had been told that ducks fly in the air, and that snapping turtles live in the water, and later heard someone say that a duck had been caught by a snapping turtle (which happens), you would be confused. How could that be possible? Someone would then have to say that ducks also live some of the time in water, at which point you would understand.

But, as said in the previous example, you don’t know what you don’t know—and sometimes you’re too afraid to ask. From John Holt in How Children Learn:

Most of us are tactful enough with other adults not to point out their errors, but not many of us are ready to extend this courtesy (or any other courtesy, for that matter) to children. Yet, it is important that we should, because they are perceptive and sensitive, and very easily hurt, humiliated and discouraged.

And, of course, for those of us who have heard that our child stands up in class, needs to walk around, can’t sit still—and for those of us facing online learning full-time—this nugget is from John Holt in How Children Fail:

We ask children to do for most of a day what few adults are able to do even for an hour. How many of us, attending, say, a lecture that doesn’t interest us, can keep our minds from wandering? Hardly any. Not I, certainly. Yet children have far less awareness of and control of their attention than we do. No use to shout at them to pay attention. If we want to get tough enough about it, as many schools do, we can terrorize a class of children into sitting still with their hands folded and their eyes glued on us, or somebody; but their minds will be far away. The attention of children must be lured, caught, and held, like a shy wild animal that must be coaxed with bait to come close. If the situations, the materials, the problems before a child do not interest him, his attention will slip off to what does interest him, and no amount of exhortation or threats will bring it back.