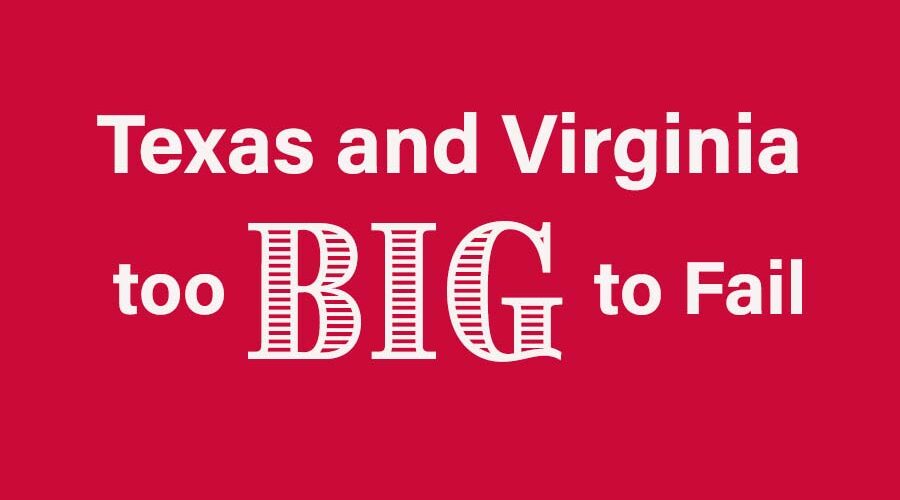 Texas and Virginia vary in physical size and population, but one thing they have in common is they are both too big to fail children — especially those who need special education supports.

Texas is toward the top of the list of U.S. states when it comes to federal, state, and local revenue, but Virginia has Fairfax County, which has a school district with one of the largest budgets and per pupil spending in the United States. In addition, Fairfax County, located just outside of Washington, D.C., is comprised of a large number of federal employees and contractors. It’s a place where it’s common to hear an elementary school-aged child share weekend news in class that is along the lines of, “I went to my daddy’s baseball game. It was the FBI vs. the White House”. (As in FBI employees vs White House employees.) It is a county with connections to lawmakers and with the lawmakers’ staff members living within it. It is a county with too many human and financial resources at its disposal to fail.

And yet . . . Texas and Virginia have failed.

In the case of Texas, the United States Department of Education’s (USDOE) Office of Special Education Programs (OSEP) just announced that USDOE will be reducing funds provided to Texas and putting specific conditions in place.

In its letter regarding the state’s corrective action response, OSEP states:

Over the last three years, OSEP has communicated with TEA about, and reviewed documents regarding, TEA’s continued noncompliance with IDEA requirements related to child find, the provision of a free appropriate public education (FAPE), and the exercise of TEA’s general supervision and monitoring responsibilities. OSEP has carefully reviewed the actions TEA has taken toward correcting the identified noncompliance . . .

Based on this, OSEP concludes that the State has not completed all the required actions necessary to address the findings of longstanding noncompliance. . . .

As a result of the longstanding nature of the State’s noncompliance with these critical IDEA requirements, OSEP is designating TEA’s FFY 2021 IDEA Part B grant award as subject to specific conditions, pursuant to our authority under 2 C.F.R. 200.208 and sections 603 and 616(g) of IDEA.

(Read the background on Texas’ noncompliance on pages three through thirteen of the letter.)

In its letter regarding the maintenance of state financial support of special education, OSEP states:

The TEA has a long history of failing to address the unique needs of children and providing them a free appropriate public education (FAPE).

In 2016, the Houston Chronicle launched the series “Denied: How Texas keeps tens of thousands of children out of special education.” It is a portrait of a state with a greater focus on money than on children. During that time period, a friend’s daughter was repeatedly denied services in Texas, to address Dyslexia, so the Chronicle’s series didn’t come as a surprise, but it was nauseating just the same.

My friend’s daughter, possibly the sweetest-natured child I’ve known, started hating school, crying, and routinely vomiting due to the anxiety of going to school where she was treated as a problem. Her negative behavior, rather than her need for immediate interventions became the school district’s focus.

As the Chronicle point out, my friend and her daughter weren’t alone. Parents statewide knew there were problems and fought hard — and finally the USDOE started issuing DMS reports.

It was exciting when the Chronicle series hit in 2016. I remember forwarding the stories to friends, especially those with kids who have Dyslexia, and our “what-if” discussions about the same thing happening in Virginia. What if the Washington Post or NPR or another major outlet local to Northern Virginia in particular did a deep dive like the Chronicle? The problems in Virginia are widespread, not Fairfax specific, so what if the news outlets out of Richmond, where VDOE is located, did a deep dive, too. What if USDOE OSEP issue a DMS report about Virginia? What if the Virginia Office of the State Inspector General got involved. What if? What if? What if? The possibilities were endless.

And then nothing happened. 2016 went by. 2017 went by. 2018 went by. 2019 went by. The Washington Post covered Fairfax County Public Schools’ (FCPS) egregious restraint and seclusion practices a few times, but the outrage that should have followed didn’t. FCPS’s restraint and seclusion practices should have made national news and should have resulted in major leadership changes within FCPS, but that didn’t happen. The same goes for all the work organizations such as Decoding Dyslexia have done. Texas isn’t the only state in which the identification of Dyslexia is a problem. It’s been an uphill slog for the parents fighting in Decoding Dyslexia and yet the number of children going unidentified and/or whose unique needs still are going unmet is inexcusable.

In 2020, things changed. COVID hit and FCPS’s failure to launch its online learning platform was so spectacularly awful that you’d have to be living under a rock not to hear about it from all the news outlets that picked up the story. A county with massive amounts of money and resources screwed the pooch not once, and not really even twice, but instead over and over as problems with the platform continued to persist.

That same year, Virginia’s Joint Legislative Audit and Review Commission (JLARC) and OSEP released three reports between the two of them, in in a matter of about six month. See: JLARC’s Reports K-12 Special Education in Virginia and Operations and Performance of the Virginia Department of Education, as well as The U.S. Department of Education’s Differentiated Monitoring and Support Report on Virginia

January 2021, within weeks of the JLARC report’s release, the Office of Civil Rights (OCR) announced that it opened an investigation into FCPS and three other school districts over “‘disturbing reports’ involving school districts denying students with disabilities equal access to education during the pandemic.”

Things got exciting again. Change could possibly be on the horizon. And yet . . .

In her response to OSEP’s report, VDOE’s Samantha Hollins released a false narrative, taking issue with OSEP’s findings. See: State officials says special education is a ‘core priority.’ Parents and advocates beg to differ And then . . . Problems persisted. The OCR investigation should have made headlines. No such luck. Politico ran the story on its portal that has a pay-wall attached, so the distribution was limited.

Meanwhile, in FCPS, the first part of a two-year special education audit commissioned by FCPS found major problems with the state of its special education program — and the report presented wasn’t even comprehensive. It was based on a small sample and failed to address the wide variety of students within the program. See: Just In: FCPS “Independent” Special Education Audit Reveals Disturbing Data

Virginia followed Texas in the past, so I sit here typing, with toes crossed (my fingers are busy), hoping that OSEP has another DMS letter being drafted, but this time for Virginia.

The problems in this state, especially in a county like FCPS, which has an extraordinary amount of financial resourced at its disposal, must turn around. The unique needs of every child must be met.

COVID sparked outrage about the state of education in Virginia, but we need more. Parents in Virginia must advocate. They must make their voices heard. They must be loud. And, they must NOT be afraid. Another parent and I are currently being sued by FCPS as a result of our efforts to expose waste in FCPS (although FCPS word smithed official statement has led people nationwide to believe a different narrative). We’re not afraid. When children are the focus, being afraid isn’t an option. Sitting quietly isn’t an option. See: Fairfax County Public Schools Threatens Legal Action Against Parents Who Exercised Their First Amendment Rights And Right To FOIA and FCPS’s Legal Actions Are A Side Show; Please Focus On The Children

(Thank you to the National Center for Learning Disabilities for the work it is doing to share the Texas Education Agency’s noncompliance. I missed the October 1 posting of the letter to OSEP’s site and appreciate your work to keep the public informed.)