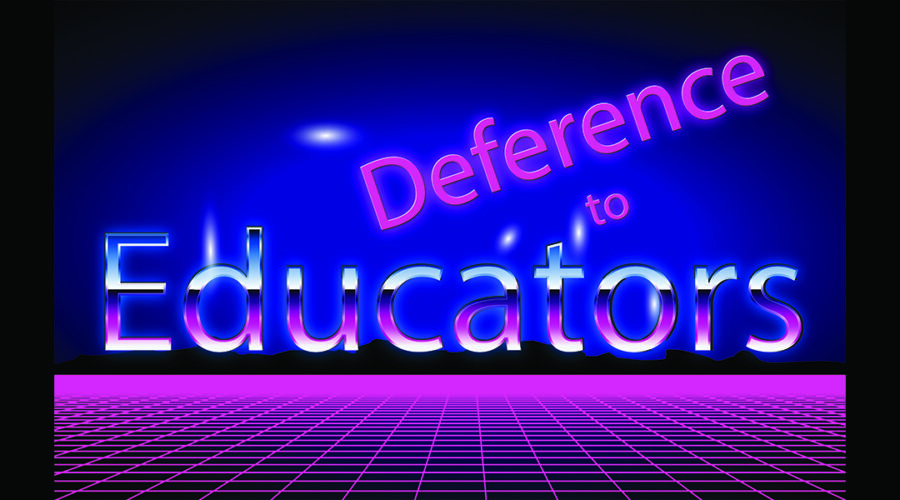 What if those educators are the root of a child not receiving FAPE?

Should respect be paid to the principal with 40 years in education, whose ignorance bred illiteracy within her school? What of the teacher with two years of experience, whose ego won’t let him believe he could possibly be wrong, so he fights everything a parent saysâ€”and liesâ€”just to stay in the right? What of the procedural support liaison who toes the county’s line rather than addressing the student’s needâ€”the one who advised you to “Remember, this is public school,” when she thought it unrealistic for the school to provide the services needed to fully address your student’s unique needs?

Do these “educators” deserve respect? Should deference be given to them?

What Say You School Division Lawyer?

The quote below comes from the closing brief that Blankingship & Keith attorney Wesley Allen submitted for a 2020 due process hearing, in which he represented Fairfax County Public Schools (FCPS).

In the case of this hearing, the hearing officer stated in her final decision that the reading program FCPS proposed for the student is inappropriate. FCPS proposed the programâ€””Just Words”â€”four school years in a row for a student who has Dyslexia, even though 1) Wilson, the publisher of “Just Words”, states that the program is not for students with Dyslexia and 2) the hearing officer for another FCPS-related due process hearing ruled that “Just Words” is inappropriate for the student on which that hearing focused, too. (This student has Dyslexia, too.)

And yet, FCPS maintained that deference should be given to the very educators who had proposed an inappropriate program four school years in a row.

Deference to the Expertise of School Officials

Furthermore, in assessing the evidence, the well-founded opinions of FCPSâ€™ professional educators and administrators, with years of hands-on experience serving disabled students, are entitled to respect. In reviewing an IEP, â€œIDEA requires great deference to the views of the school system rather than those of even the most well-meaning parents.â€ A.B. v. Lawson, 354 F.3d 315, 328 (4th Cir. 2004). The Supreme Court confirmed this principle in Endrew F., 137 S.Ct. at 1001. Thus, â€œ[l]ocal educators deserve latitude in determining the individualized education program most appropriate for a disabled child.â€ Accord Hartmann v. Loudoun Cnty. Bd. of Educ., 118 F.3d 996, 1001 (4th Cir. 1997).

In reviewing the substantive adequacy of IEP goals, a court “must appreciate that the question is whether the IEP is reasonable, not whether the court regards it as ideal.” Endrew F., 137 S.Ct. at 999. Further, a court may not “substitute [its] own notions of sound educational policy for those of the school authorities which they review.” Id. at 1001 (quoting Rowley, 458 U.S. at 206); see also Dixon v. District of Columbia, 83 F. Supp. 3d 223, 233 (D.D.C. 2015) (“The sufficiency of goals and strategies in an IEP is precisely the type of issue upon which the IDEA requires deference to the expertise of the administrative officers.” (alteration omitted) (quoting Grim v. Rhinebeck Cent. Sch. Dist., 346 F.3d 377, 382 (2d Cir. 2003))). The determination of whether a student was offered or denied FAPE is determined by looking to what was reasonable at the time the IEP was developed, not in hindsight. Fuhrmann v. East Hanover Bd. of Educ., 993 F.2d 1031, 1041 (3d Cir. 1993).

Here, the FCPS members of the IEP team who drafted and implemented the various components of the stay put IEP and who have most recently proposed the August 15, 2018, December 9, 2019, March 9, 2020, and September 2, 2020 IEPs, respectively, consist of educational experts, including teachers and staff who have directly worked with [Student] and/or were directly familiar with what FCPS could offer. A majority of these witnesses were accepted as experts in the field of special education. Their opinions as to the appropriateness of FCPSâ€™ proposed IEP, placement, and adequacy of [Student]â€™s goals, are supported by the record, and should be respected.

A Few Notes on the School Division Lawyer’s Opinion

It’s interesting when you dig through cited case law, to see all that surrounds pulled quotes. Chief Justice Roberts did, indeed, confirm the “principle” of deference to educators in his Endrew F. decision, but he included a caveat, too: “deference is based on the application of expertise and the exercise of judgment by school authorities.” Deference is not something to be given just for the sake of giving it. How the educators did or didn’t apply their expertise and how they exercised their judgement must be weigh when determining whether deference is due.

When all is said and done, a student offered an educational program providing â€œmerely more than de minimisâ€ progress from year to year can hardly be said to have been offered an education at all. For children with disabilities, receiving instruction that aims so low would be tantamount to â€œsitting idly . . . awaiting the time when they were old enough to â€˜drop out.â€™â€ Rowley, 458 U. S., at 179 (some internal quotation marks omitted). The IDEA demands more. It requires an educational program reasonably calculated to enable a child to make progress appropriate in light of the childâ€™s circumstances. . . .

We will not attempt to elaborate on what â€œappropriateâ€ progress will look like from case to case. It is in the nature of the Act and the standard we adopt to resist such an effort: The adequacy of a given IEP turns on the unique circumstances of the child for whom it was created. This absence of a bright-line rule, however, should not be mistaken for â€œan invitation to the courts to substitute their own notions of sound educational policy for those of the school authorities which they review.â€ Rowley, 458 U. S., at 206.

At the same time, deference is based on the application of expertise and the exercise of judgment by school authorities. The Act vests these officials with responsibility for decisions of critical importance to the life of a disabled child. The nature of the IEP process, from the initial consultation through state administrative proceedings, ensures that parents and school representatives will fully air their respective opinions on the degree of progress a childâ€™s IEP should pursue. See Â§Â§1414, 1415; id., at 208â€“209. By the time any dispute reaches court, school authorities will have had a complete opportunity to bring their expertise and judgment to bear on areas of disagreement. A reviewing court may fairly expect those authorities to be able to offer a cogent and responsive explanation for their decisions that shows the IEP is reasonably calculated to enable the child to make progress appropriate in light of his circumstances.

Also of note: In his brief, Wesley chose to go with deference to “school officials” rather than to educators. Wesley is the same lawyer who reasoned that he is a “school official”, and as a “school official” it is perfectly fine for teachers to bcc him on all email correspondences with a student, to include personal emails from the student. (See: “FCPS Lawyer bccâ€™d on Studentâ€™s Emails; Claims He is a School Official; Says itâ€™s â€œAppropriateâ€ for Him to Have Access” and “Fairfax County Public School Lawyer bccâ€™d on Email between Teacher and Student; Why?“)

Of course, “confidentiality” is a part of being a “school official” and yet, for the due process related to the quote below, Blankingship & Keith and FCPS breached the confidentiality of others (to include providing a transcript for another student’s due process hearing) during the hearing. Makes one question how anyone can trust a school division and school division counsel that can’t even secure private information during a due process hearing. (See: “Fairfax County Public Schools, Sands Anderson, and Blankingship & Keith Breach Privacy During Due Process“)