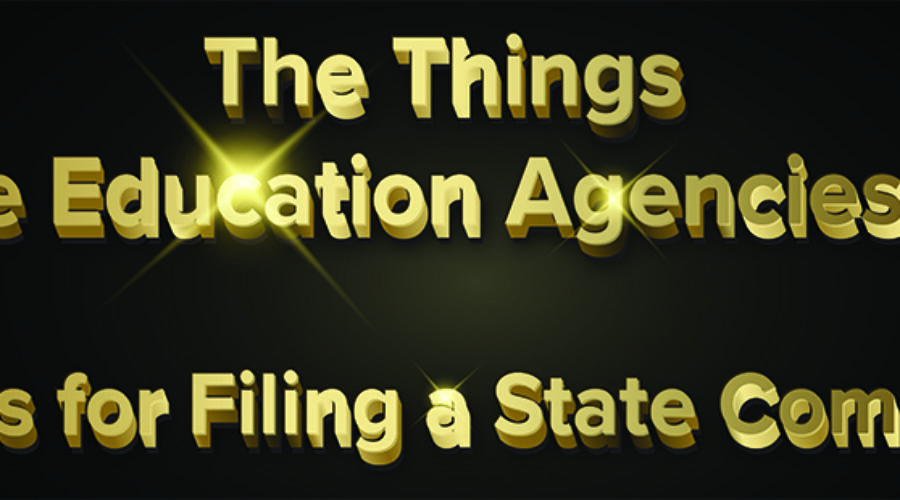 Have something to contribute about your state and/or county? Please email support @ specialeducationaction . com

The goal is to update this post as new information is available, to include information related to other states.

Are parents required to use a specific form when filing state complaints?

Each SEA must adopt written procedures for—

(1) Resolving any complaint, including a complaint filed by an organization or individual from another State, that meets the requirements of §300.153 by—

(i) Providing for the filing of a complaint with the SEA; and

(ii) At the SEA’s discretion, providing for the filing of a complaint with a public agency and the right to have the SEA review the public agency’s decision on the complaint; and

(2) Widely disseminating to parents and other interested individuals, including parent training and information centers, protection and advocacy agencies, independent living centers, and other appropriate entities, the State procedures under §§300.151 through 300.153.

(b) Parents, public agencies, and other parties may use the appropriate model form described in paragraph (a) of this section, or another form or other document, so long as the form or document that is used meets, as appropriate, the content requirements in §300.508(b) for filing a due process complaint, or the requirements in §300.153(b) for filing a State complaint.

The complaint includes insufficient facts to support the alleged violation.

* The Parent alleged that FCPS did nothing to explore her questions about student’s auditory processing and listening deficits. The Parent has not included dates on the complaint form, and thus this allegation does not include sufficient facts.

* The Parent alleged that FCPS perpetually denied the student FAPE but fails to articulate how this occurred on her complaint form. Please include details in the complaint and not via attachments.

* The Parent alleged that FCPS denied testing and limited ESY to the summer but does not articulate when these actions occurred. Please include dates on the complaint form.

In this case, the parent did include all of the required information in the complaint. However, it wasn’t on VDOE’s “form”. VDOE didn’t address the fact that the form wasn’t accessible via the links to the form that VDOE provided in its document “Parent’s Guide to Special Education Dispute Resolution”. The links were broken/bad—and today, almost four years later, remain broken/bad, even though VDOE was cited by JLARC for inaccurate information on its website.

The parent’s response to VDOE follows:

Per VDOE’s “Parent’s Guide to Special Education Dispute Resolution” guidelines, “A complaint does not have to be submitted on a special form. However, there is a special form available at VDOE’s Web site – www.doe.virginia.gov/VDOE/dueproc, or you can copy the reproducible form in the Appendix at the back of this manual.”

*Please note that the link provided is broken/does not work – and not that because I do not have a print edition of this document, I don’t have access to the “reproducible form…back of this manual.”

If VDOE does, indeed, want a specific form followed, then it needs to make the form accessible and note that it DOES, indeed, WANT IT USED.

Please also note that NOWHERE in the VDOE’s “Parent’s Guide to Special Education Dispute Resolution” guidelines does it state that the complaint must be written within one letter or “form”.

All dates and documentation needed are available in the complaint packet provided.