TODAY: $6 Billion Distributed to Six States and the District of Columbia; What is the Status of Your State’s ARP ESSER Plan? 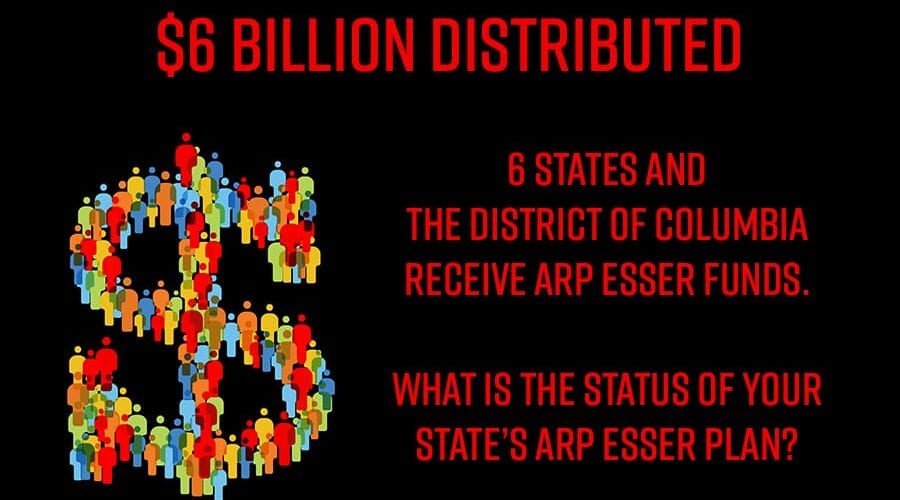 TODAY: $6 Billion Distributed to Six States and the District of Columbia; What is the Status of Your State’s ARP ESSER Plan?

As stated by USDOE in the document “State Plan for the American Rescue Plan Elementary and Secondary School Emergency Relief Fund“, each state education agency (SEA) had until June 7, 2021, to submit either:

(1) its ARP ESSER plan or (2) the State requirements that preclude submission of the plan by that date and a date by which it will be able to submit its complete ARP ESSER plan.

Of the states that have not been approved, USDOE reported, “A total of 40 states have submitted their ARP ESSER state plans to the Department. The Department is reviewing the plans expeditiously and is in contact with states to ensure their plans meet all necessary requirements in order to access the remaining funds, as outlined in the ARP. The Department is also in contact with states that have not yet submitted plans, the vast majority of which are due to state board of education or legislative review requirements.”

$81 billion of the ARP ESSER funds was made available earlier this year to all states, the District of Columbia, and Puerto Rico. President Biden made this announcement at the National Safe School Reopening Summit that was hosted by USDOE.

The distribution of the remaining funds is tied to the approval of a state’s plan being approved.

Contact your SEA to find out if your state is among the 40 states that have submitted a plan. If not, ask why. Either way, request the status of the report.