U.S. Dept. of Ed. Announces Initiative to Stop Practice of Paying Less than Minimum Wage to Individuals who have Disabilities 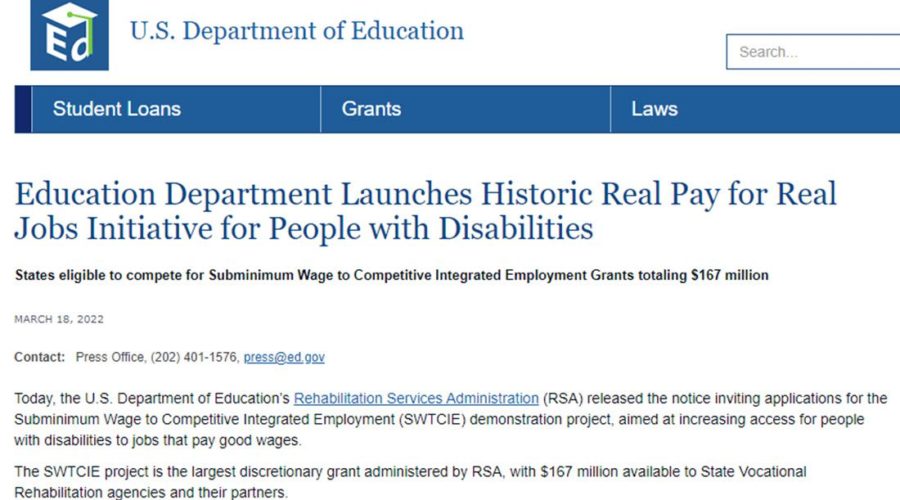 U.S. Dept. of Ed. Announces Initiative to Stop Practice of Paying Less than Minimum Wage to Individuals who have Disabilities

March 18, 2022, the United States Department of Education’s (USDOE) Rehabilitation Services Administration (RSA) announced an initiative that is “aimed at increasing access for people with disabilities to jobs that pay good wages.”

According to a press release distributed by USDOE, the initiative, Subminimum Wage to Competitive Integrated Employment (SWTCIE), “is the largest discretionary grant administered by RSA, with $167 million available to State Vocational Rehabilitation agencies and their partners” and “will award grants to as many as 18 State Vocational Rehabilitation agencies and their partners that will create employment opportunities for individuals with disabilities. The jobs will be in critical need areas, including home and community-based services, the arts, or transportation and related industries. In addition, applicants may submit proposals in other areas that will transition individuals from subminimum wage employment to competitive integrated employment.”

Although the Notice Inviting Applications won’t be published to the Federal Register until March 21, 2022, the unpublished version is available for previewing.