Former VDOE Superintendent James Lane Heads to Washington; How Will U.S. Dept. of Education Defend Hiring the Official Who Reigned Over Years of VDOE Failures? 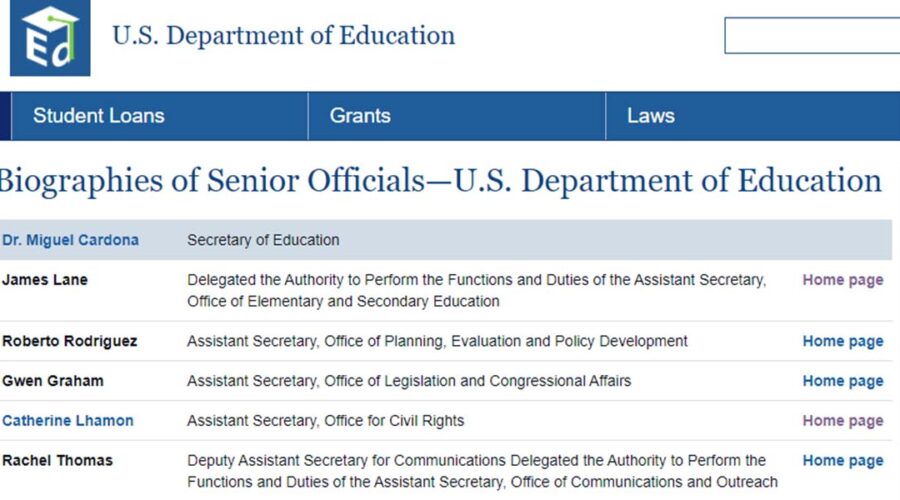 Former VDOE Superintendent James Lane Heads to Washington; How Will U.S. Dept. of Education Defend Hiring the Official Who Reigned Over Years of VDOE Failures?

Updated February 8, 2022: James Lane, the former superintendent of public instruction at the Virginia Department of Education (VDOE) is making a move from Richmond to Washington, D.C. is now working as a senior advisor with the United States Department of Education (USDOE), under Secretary Miguel Cardona. According to a February 8, 2022, conversation with Lane’s assistant Keigo Oharu, Lane has been with USDOE for a few weeks, helping to lead the Office of Elementary and Secondary Education (OESE), following the departure of Ian Rosenblum. Rosenblum was appointed to the position just over a year ago, in January 2021. Oharu could not confirm if Lane is being considered for the position, other than to say it is a political appointee position and Lane is not officially in the position, but is helping to lead the office.

Lane’s departure from VDOE was announced December 18, 2021. Within the past week, his name quietly appeared on the United States Department of Education’s (USDOE’s) site without any press release or fanfare announcing that he has been “delegated the authority to perform the functions and duties of the Assistant Secretary, Office of Elementary and Secondary Education.” (USDOE time stamps pages on its site. The senior leadership page on which Lane appears was last updated February 1, 2022.)

How will USDOE defend hiring the senior official whose reign of failure harmed so many children?

A Record of Failures and Contradictions

During Lane’s tenure at VDOE (May 2018 to December 2021), VDOE’s reputation for failing students who have special education needs continued to grow. Within a period of six months in 2020, three critical reports focused on VDOE were issued, one from the USDOE’s Office of Special Education Programs (OSEP) and two from Virginia’s Joint Legislative Audit and Review Committee (JLARC).

Yet . . . Somehow Virginia continued to “meet the requirements and purposes of the Individuals with Disabilities Education (IDEA) Act expectations” as released in the annual report issued by the USDOE’s Office of Special Education and Rehabilitative Services (OSERS).

2) States self-report the data on which their ratings are based.

In USDOE’s own words, “IDEA requires each state to develop a State Performance Plan (SPP) and Annual Performance Report (APR) that evaluates the State’s efforts to implement the requirements and purposes of the IDEA, and describes how the State will improve its implementation. The Part B SPP/APR and Part C SPP/APR include Indicators that measure child and family results, and other indicators that measure compliance with the requirements of the IDEA. Since 2015, the Part B SPP/APR and Part C SPP/APR have included a State Systemic Improvement Plan through which each State focuses its efforts on improving a State-selected child or family outcome. The IDEA also requires each State to report annually to the Secretary on its performance under the SPP. Specifically, the State must report in its APR, the progress it has made in meeting the measurable and rigorous targets established in its SPP.”

Although Virginia achieved the rating of “meets expectations” in 2020 and 2021, critical reports chronicling the years during which the self-reporting for those ratings occurred paint a different portrait.

June 23, 2020, the USDOE’s Office of Special Education Programs (OSEP) issued this report. To date, almost two years after its release, there are findings in the report that still remain uncorrected. A key takeaway from the report:

Findings in the report include:

Based on the review of documents, analysis of data, and interviews with State personnel, OSEP concludes that the State is not exercising its general supervisory and monitoring responsibilities to implement its State complaint resolution system in a manner consistent with all of the requirements in 20 U.S.C. § 1412(a)(11)(A) and 1416(a) and 34 C.F.R. §§ 300.149 and 300.600 and 34 C.F.R. §§ 300.151 through 300.153 for the following reason: The State does not ensure that it resolves every complaint that meets the requirements of 34 C.F.R. § 300.153 in accordance with the minimum State complaint procedures in 34 C.F.R. § 300.152, specifically in the situation where the State has developed a communication plan with an individual parent-complainant.

Based on the review of documents, analysis of data, and interviews with State personnel, OSEP concludes that:

b. VDOE does not ensure that its LEAs track the implementation of the resolution timelines in 34 C.F.R. § 300.532(c)(3) and that hearing officers track the implementation of the expedited due process hearing timelines in 34 C.F.R. § 300.532(c)(2) in order to properly track due process hearing decision
timelines.

Because the State does not have a mechanism to reliably determine the date on which the 45-day due process hearing timeline in 34 C.F.R. § 300.515(a) commences, the State is unable to report valid and reliable data on the adjudication of due process complaints as required under Section 618(a)(1)(F) of IDEA.

Because the State does not have a mechanism for reliably determining whether expedited hearing timelines are met, the State is unable to report valid and reliable data on expedited due process hearings in accordance with Section 618(a) of IDEA

Based on the review of documents and interviews with State personnel, OSEP concludes that the State does not have procedures and practices that are reasonably designed to implement a mediation process that is consistent with the requirements of 20 U.S.C. § 1415(e) and 34 C.F.R. § 300.506. Specifically, the State’s practice of having its mediation coordinator co-mediate when the mediator is new, and permitting its mediation coordinator to be present at the mediation sessions is inconsistent with the requirement in 34 C.F.R. § 300.506(c)(1) that the State’s procedures ensure that a mediator is not an employee of the SEA and has no personal or professional interest that would conflict with the mediator’s objectivity

Based on a review of documents and interviews with State personnel, for the reasons set forth above, OSEP concludes that the provision of Virginia’s regulation, 8VAC20-81-170(B)(2)(a) and (e), are inconsistent with 20 U.S.C. § 1415(b)(1) and 34 C.F.R. § 300.502, because the State’s regulation restricts a parent’s right to an IEE at public expense to only those areas in which the public agency had previously evaluated the child.

Samantha Hollins, VDOE’s assistant superintendent of special education and student services, responded to the report by denying findings made by OSEP.

For example, based on its investigation, OSEP concluded the following:

State does not have procedures and practices that are reasonably designed to implement a mediation process that is consistent with the requirements of 20 U.S.C. § 1415(e) and 34 C.F.R. § 300.506.

In its draft report, OSEP wrongly states as factual background the “active participation of the State’s mediation coordinator in the mediation sessions themselves, in addition to the mediator of record.” The Coordinator of Mediation Services, a VDOE employee, does not comediate either with new or experienced mediators. Neither does the Coordinator attend all mediations. . . . The Coordinator does not involve himself in substantive issues.

I didn’t know better. It was my first mediation—and neither the county nor the state ensured that I was informed or that regulations were followed.

VDOE’s Operations and Performance of VDOE

October 5, 2020, Virginia’s Joint Legislative Audit and Review Committee (JLARC) issued this report after JLARC approved a 2018 resolution directing staff to review VDOE because, “(i) it is a large state agency that plays a critical role in educating Virginia’s children and (ii) it had not been reviewed by JLARC in many years.”

VDOE could do more to effectively supervise local divisions

December 14, 2020, JLARC issued a report focused on special education. In what was no surprise to Virginia families, the report found the following:

Enrollment in special education varies across Virginia school divisions, both overall and by disability

Despite emphasis on inclusion, Virginia does not prepare general education teachers or administrators with necessary special education-related skills

VDOE’s ongoing monitoring is too limited

According to an April 2021 presentation by Samantha Hollins, VDOE’s assistant superintendent of special education and student services had no “updates” or “next steps” in response to the K-12 report.

According to a 2021 JLARC Impacts report that details actions taken by Virginia’s General Assembly, the “General Assembly directed VDOE to develop a plan to improve its ongoing oversight of special education. The plan should explain how VDOE will ensure school divisions’ compliance with laws and regulations for special education identification processes, IEP development and implementation, postsecondary transition planning, inclusion in academic and extracurricular experiences, and special education staffing. The plan should also propose ways to increase monitoring capacity and on-site visits using existing resources and by leveraging federal funding. VDOE is to submit its plan to the General Assembly’s education committees and JLARC by November 1 [of 2021].”

November 12, 2021, Lane issued a memo announcing the release of “Supplemental Guidance for Evaluation and Eligibility in Special Education” that were developed in response to JLARC’s 2020 report.

COVID put a spotlight on what those of us in the special education community have known for a long time. Racism, discrimination, and inequity have long existed in Virginia’s schools.

For decades parents, educators, and other advocates have been outspoken critics of the United States’ education system. The fallout from COVID-related school closures fueled and put a spotlight on an already raging fire.

After Governor Northam issued an executive order calling for the cessation of in-person education, James Lane stood by as individuals like Samantha Hollins insisted that the governor ordered that school buildings had to be closed. Yet, FOIA responses from the governor’s office indicate an office caught off guard by school systems statewide terminating special education services.

Then came even greater failures.

One of the wealthiest school districts in the United States — Fairfax County Public Schools (FCPS) — repeatedly made headlines nationwide in response to its spectacular failure to launch an online learning platform not once, but numerous times.

Next came FCPS’s pay-to-play, in-person education program that led to the Office of Civil Rights (OCR) opening yet another investigation in to FCPS.

What Say You USDOE?

After years of problems, to include self-reporting that doesn’t align with three reports done by outside agencies, I return to the question at the top of this article:

How will USDOE defend hiring James Lane? Virginia’s education system is a mess. Who voted for the individual who most-recently reigned over that mess to be a senior official at the federal level? How is this decision to be defended?