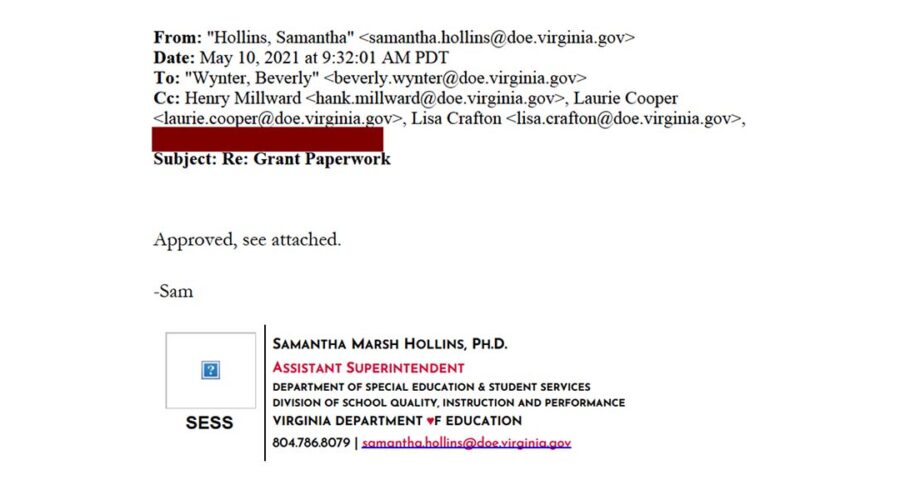 The Virginia Department of Education (VDOE) has long been known for partnering with Carelessness, just like the school districts below it.

Samantha is VDOE’s assistant superintendent for its department of special education and student services. She should know at this point the importance of ensuring emails are sent to the correct people. For example, Sam knows VDOE found FCPS in noncompliance for FERPA violations after South County High School Principal Gary Morris cc’d the wrong person on an email that included private information about a student—and I’d wager such a situation isn’t unique to FCPS or Gary Morris. See “FERPA Violation Report Card: Fairfax County Public Schools – Special Education Action“

The gist of the article is that if you’re looking for information related to your child and/or school district and/or something else, often what you want is starting you in the face.

An add on: Sometimes what you seek ends up landing in your lap.

This is what happened to me almost four years ago, when FCPS included an improperly redacted version of its internal document “Hot Topics” within its response to a FERPA request I did. Among other things, the document admits FCPS’s failures to identify students with Dyslexia and its failures related to fidelity of implementation of programming—and it mentioned major concerns about privacy breaches and the need for training across the board. I FOIA’d the “Hot Topics” report for all divisions in FCPS and was provided heavily redacted versions for the other divisions, but only for the same time period.

Those reports listed over 400 special education related violations. Unfortunately, even after I forwarded the report to VDOE and requested it open an investigation focused on numerous areas of systemic violations, VDOE refused. See: “FCPS Reports List 400+ Special Education Violations; VDOE Refuses to Investigate”

I find myself digressing . . . Back to the main point.

Sometimes things fall in your lap. (Sometimes benign, sometimes another piece of the puzzle, and sometimes full-on cancerous.)

How Do Things End Up Falling In Your Lap?

If you happen to be a parent who emails different people are a routine basis, your email will end up being one that auto-populates the “to” field when recipients for an email are chosen. It seems like this is what happened in the case of Samantha Hollins in May, since there is no explanation for why she would have sent this information to the FCPS parent.

FCPS staff sent around an email in which it admitted that yes, it was at fault for the violation alleged in the OCR complaint—and included a parent who had the same last name as a staff member.

The parent contacted me, thinking it might be one I submitted to OCR.

In turn, I forwarded the emails in which FCPS admitted its noncompliance to OCR.

It took FCPS a while to identify its error, so the parent continued to receive emails about its noncompliance. OCR has everything and is investigating this as a systemic violation, rather than school specific.

Bottom line: Parent advocacy and school district (or state agency) carelessness is sometimes all one needs. Patience goes a long way, too.

Click on image below to view email strand in full.