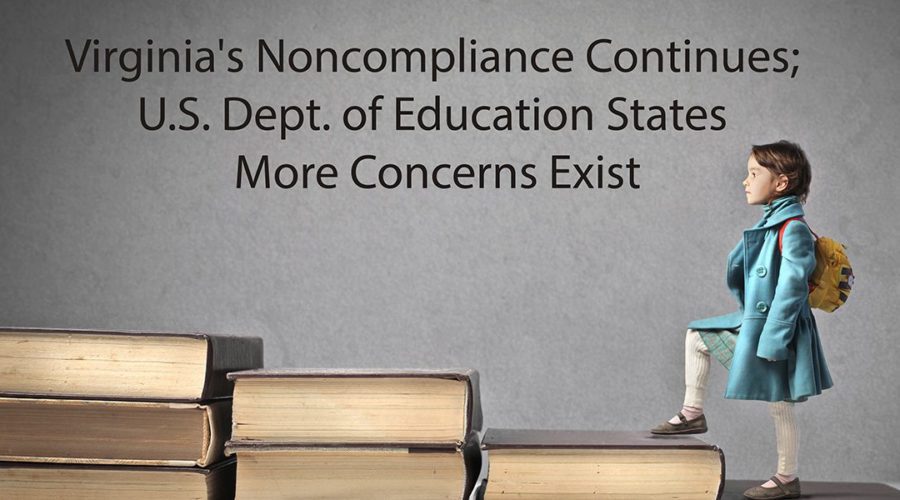 For each issue cited, OSEP required an action to address the issue—and these actions had 90-day timelines associated with them.

Almost two-and-a-half years later, issues remain, the DMS report has yet to be closed out, and more concerns continue to rise.

February 8, 2022, OSEP sent VDOE its response to the corrective action information. The cover letter and enclosure (see documents here) were sent by Valerie Williams, director of OSEP, to Jillian Balow, superintendent of public instruction for VDOE.

Neither OSEP nor VDOE made the February 8, 2022, letter available to the public. Special Education Action obtained the letter March 16, 2022, via a FOIA request submitted to VDOE, and published it March 17, 2022.

In terms of resolving the DMS findings, the meeting on Wednesday was very useful, and was the type of discussion that the team was hoping for. We recognize that the questions did not come to you until shortly before the meeting, but you were able to provide helpful clarifications, which was much appreciated. Going forward, we will provide information to you in advance. The questions discussed were aligned to the written communications provided to you earlier this year. Koko and Matt believe that we are close to having the information required to resolve the DMS findings. As indicated in Koko’s email to you yesterday, they are preparing a few follow up questions and requests, which will be sent to you next week. Upon receipt, if you would like to discuss further, please reach out to Matt and Koko and they would be happy to talk with you.

Our focus has been on reaching resolution of the DMS findings, and we have tried not to add concerns that have been communicated to us by parents and other advocates. Our intention is for Koko and Matt to have a separate meeting with you to present any additional areas of concern or discussion for your consideration. They will provide specific examples of these concerns in advance of the meeting for your consideration.

Finally, it is our hope that we can move forward collaboratively. Towards that end, I encourage you to reach out to Matt, as the supervisor for the Virginia team, if you have continued concerns. Rest assured that Valerie and I will be in communication with Matt and Gregg, and stay informed of the progress in resolving any concerns.

The email is a nice, diplomatic email to Samantha Hollins, but the fact remains that, under her leadership, VDOE’s noncompliance has flourished.

Not only did VDOE fail to adhere to the 90-day timeline, but issues continue to rise.

To date, OSEP has not provided an update on the status of the DMS report or if another report will be issued to address the many problems that went unaddressed in the first report.