What Is An Education Record? 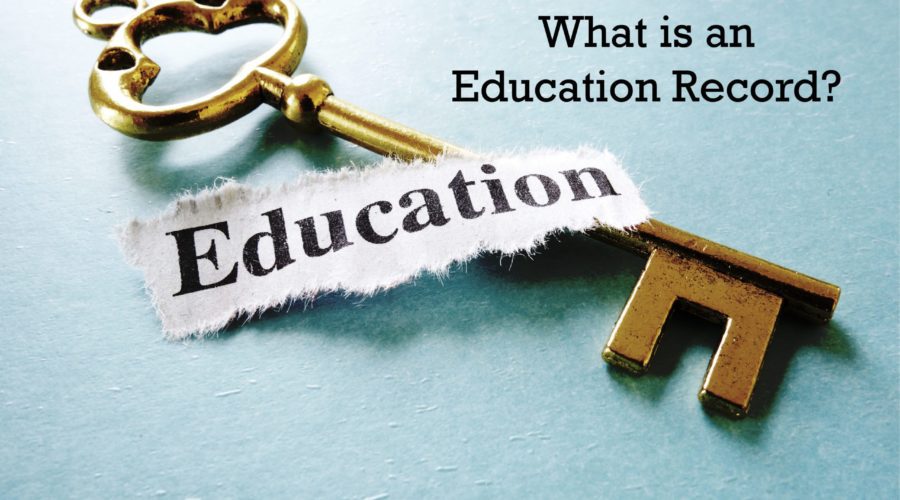 What Is An Education Record?

To fully access your student’s education records, you must have a full understanding of the definition of “education records”. The same holds true if you are trying to monitor whether the confidentiality of the student’s records is being maintained.

An education record simply isn’t a file consisting of report cards and progress reports. It includes such records as emails and legal invoices, too.

The term ‘‘education records’’ means, except as may be provided otherwise in subparagraph (B), those records, files, documents, and other materials which—
(i) contain information directly related to a student; and

Pursuant to Individuals with Disabilities Education Act, §300.611(b):

(b) Education records means the type of records covered under the definition of “education records” in 34 CFR part 99 (the regulations implementing the Family Educational Rights and Privacy Act of 1974, 20 U.S.C. 1232g (FERPA)).

You’ll find a definition within your state’s code, too. For example, in Virginia, pursuant to Virginia Code § 22.1-289:

“Education record” means those records that are directly related to a student and maintained by an educational agency or institution or by a party acting for the agency or institution. The term also has the same meaning as “scholastic record.” In addition to written records, this also includes electronic exchanges between school personnel and parent regarding matters associated with the child’s educational program (e.g., scheduling of meetings or notices). This term also includes the type of records covered under the definition of “education record” in the regulations implementing the Family Education Rights and Privacy Act. (20 USC § 1232g(a)(3); § 22.1-289 of the Code of Virginia; 34 CFR 300.611(b))

In 2021, I filed a state complaint with Virginia Department of Education (VDOE), related to Fairfax County Public Schools’ repeat failures to maintain privacy of education records. Earlier that year, FCPS released legal invoices in response to a FOIA request, but neglected to redact personally identifiable information.

VDOE found that the legal invoices are student records. The following is its reasoning behind this finding:

● In the past twenty years, much litigation in this area has focused on defining the scope of records covered by the statute. The upshot of these cases is that not every document that contains PII is “maintained” within the meaning of the statute, and accordingly, not every document containing PII is an education record subject to its protections.

● Litigation in this area has further focused on whether documents directly related to a student that exist incidentally are “maintained” by the school division. In 2002, the U.S. Supreme Court specifically examined whether student-specific information had been “maintained”—thus constituting an “education record”—in Owasso Public Schools v. Falvo. In this case, the Court ruled that peer-graded papers had yet to be “maintained” by the school, and, accordingly, did not constitute education records. The Court opined:
The word “maintain” suggests FERPA records will be kept in a filing cabinet in a records room at the school or on a permanent secure database, perhaps even after the student is no longer enrolled.

● Subsequent judicial rulings further refine the issue of “maintaining” records—specifically, email correspondence. Citing Owasso, a California federal district court focused on the two-pronged definition of “education record” in S.A. v. Tulare Co. Office of Educ. and Calif. Dept. of Educ. The court found that:
an email is an education record only if it both contains information related to the student and is maintained by the educational agency. Conversely, an email that is not maintained by the educational
agency is not an education record [emphasis added].

The court specifically rejected the student’s argument that the school division “maintained” emails electronically “in inboxes and [its] server….” The court stated:

Emails, like assignments passed through the hands of students, have a fleeting nature. An email may be sent, received, read, and deleted within moments. As such, Student’s assertion–that all emails that
identify Student, whether in individual inboxes or the retrievable electronic database, are maintained “in the same way the registrar maintains a student’s folder in a permanent file”–is “fanciful.” Owasso, 534 U.S. at 433. Like individual assignments that are handled by many student graders, emails may appear in the inboxes of many individuals at the educational institution. FERPA does not contemplate that education records are maintained in numerous places.

● In 2017, a federal district court in Pennsylvania relied on Owasso and Tulare in addressing whether e-mails [discussing a student’s potential retention in first grade], in fact, are “education records” as envisioned by the interlocking statutory schemes at issue here.… Unless [LEA] kept copies of e-mails related to [student] as part of its record filing system with the intention of maintaining them, we cannot reach the conclusion that every e-mail which mentions [student] is a bona fide education record within the statutory definition. These e-mails appear to be casual discussions, not records maintained by [LEA]. Since these e-mails do not qualify as education records to which Plaintiffs are guaranteed a right of access, there was no violation of their procedural rights….

● While these cases stand for the proposition that not every document that contains a student’s name constitutes an education record, the question presented in the instant case is different. Here, the documents disclosed clearly contained some PII, and the LEA does not directly argue that they were not “maintained”. In fact, the documents have presumably been maintained by the LEA as financial or accounting records. Rather, the LEA urges that the records are not of the type that could be “easily identified as part of an education record” and thus are not subject to FERPA. Because the question is fundamentally different, the case law cited above sheds some light on the issue, but is not dispositive.
Logically, persuasive arguments can be made for and against the school division’s position.

● On the other hand, we note that billing records such as these are related to event(s) that occurred in connection with the student’s educational services. We would expect to see substantive information related to a due process hearing, a disciplinary appeal or a suit otherwise arising from the relationship between the student and the school division in the student’s educational record. Should the school division’s decision about whether to put a copy of the bill in the file as well as in the accounting office drive whether the document, clearly containing PII and clearly maintained by the school division, is subject to FERPA protections?

● The LEA has not cited any legal authority to support its position, nor have we identified any authority shedding further light on this matter. As a result, we have no supporting authority to cause us to depart from the tried and true construct. Thus, we must conclude that the documents contain PII and are maintained by the school division, therefore they are education records under FERPA and this matter is within our jurisdiction.