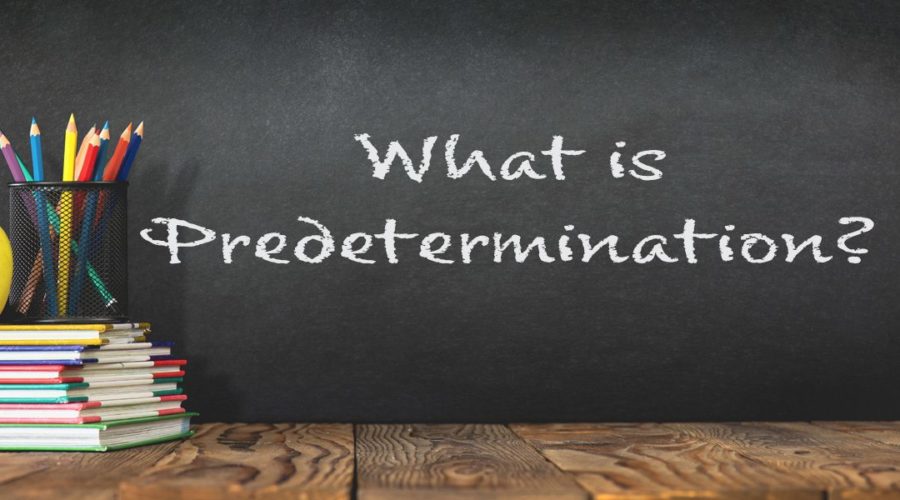 In the space of K-12 education, predetermination occurs when a local education agency (LEA) pre-determines decisions related to a student prior to the development of an IEP and regardless of any data and/or any other type of input from parents, which parents might provide during IEP meetings.

In matters alleging a procedural violation, a hearing officer may find that a child did not receive a free appropriate public education if the procedural inadequacies (II) significantly impeded the parents’ opportunity to participate in the decisionmaking process regarding the provision of a free appropriate public education to the parents’ child.

Deal v. Hamilton County Board. of Education provides an example of predetermination related to a student named Zachary and the case reaffirms predetermination as “a procedural violation of the IDEA”:

The evidence reveals that the School System, and its representatives, had pre-decided not to offer Zachary intensive ABA services regardless of any evidence concerning Zachary’s individual needs and the effectiveness of his private program. This predetermination amounted to a procedural violation of the IDEA. Because it effectively deprived Zachary’s parents of meaningful participation in the IEP process, the predetermination caused substantive harm and therefore deprived Zachary of a FAPE.

There, the district court had concluded, based on a series of letters written before the IEP meeting that focused on a change in placement, that the school district had decided to change the disabled student’s placement before developing an IEP to support the change. Id. at 258-59. The Fourth Circuit affirmed the district court’s determination that a procedural violation had occurred that deprived the student of a FAPE:

Under the EHA [the predecessor to the IDEA], the general rule is that placement should be based on the IEP. 34 C.F.R. § 300.552. The appendix interpreting the EHA regulations states that “IEP objectives must be written before placement.” 34 C.F.R. Part 300, App. C., Question 42. The decision to place Jonathan at Randolph before developing an IEP on which to base that placement violates this regulation as interpreted by the Secretary of Education. It also violates the spirit and intent of the EHA, which emphasizes parental involvement. After the fact involvement is not enough.

Id. at 259 (footnote omitted). The relevant regulation provides that, in determining the educational placement of a disabled child, the public agency must ensure that the placement “[i]s based on the child’s IEP.” 34 C.F.R. § 300.552.

The district court initially found that the school system violated EHA procedure by determining appropriate placement before developing an IEP. See 34 C.F.R. § 300.552. The court based its finding on a series of letters written before the IEP meeting held in November, 1985, which focused on a change from Melmark to Randolph. Based on the procedural violation, the court ordered the continuation of Melmark placement.

The court subsequently vacated its initial decision in light of 34 C.F.R. § 300.347 and Patterson C. v. Board of Education of Prince George’s County, No. M-85-3948 (D.Md. Sept. 23, 1986), aff’d, 818 F.2d 29 (4th Cir.1987) (per curiam). In Patterson C., the courts affirmed an IEP developed after placement in a private school was decided. Section 300.347 specifically calls for a chosen private school to participate in IEP development. After vacating his earlier decision, however, Judge Merhige reached the same result on the merits. He found that the burden of proof was on the defendants as they were seeking to change Jonathan’s placement. He further found that they had not carried that burden by showing that Jonathan would receive educational benefits at Randolph. Therefore, he ordered the Melmark placement to continue. The defendants appeal his decision regarding placement, and the Spielbergs appeal his finding of procedural compliance.

Deal v. Hamilton County Board of Education brings up the important point that a parent’s attendance at IEP meetings doesn’t equate to parent participation:

The district court erred in assuming that merely because the Deals were present and spoke at the various IEP meetings, they were afforded adequate opportunity to participate. Participation must be more than a mere form; it must be meaningful. W.G., 960 F.2d at 1485; see also Knox County Sch., 315 F.3d at 694-95 (stating that school officials must be willing to listen to the parents and must have open minds). Despite the protestations of the Deals, the School System never even treated a one-on-one ABA program as a viable option. Where there was no way that anything the Deals said, or any data the Deals produced, could have changed the School System’s determination of appropriate services, their participation was no more than after the fact involvement. See Spielberg, 853 F.2d at 259.

The School System noted, at oral argument, that the Deals’ participation in the IEP process is evidenced by their contributions to the descriptions of Zachary’s present levels of performance and to the stated goals and objectives contained within the IEPs. The School System was unable to point to any evidence, however,  that the Deals contributed to the operative portions of the IEP-that their opinions were considered in determining the services that would be provided to Zachary. In short, nothing offered by the School System suffices to surmount the Golconda of circumstantial evidence adduced by Plaintiffs-Appellants to establish the existence of an unofficial School System policy of rejecting any requests for an intensive, one-on-one ABA program. This evidence includes the internal memorandum by Sandra Jerardi flagging Zachary’s education program as a “sensitive case with regards to school program and/or Lovaas,” as well as various comments from School System personnel, including a statement that “the powers that be” were not funding ABA programs.

One-Size-Fits-All Programs Do Not Equal FAPE

In addition, the opinion issued after Deal v. Hamilton County Board of Education reaffirms that one-size-fits-all programs do not equal FAPE:

“The School System seemed to suggest, at oral argument, that it is entitled to invest in a program such as TEACCH and then capitalize on that investment by using the TEACCH program exclusively. But this is precisely what it is not permitted to do, at least without fully considering the individual needs of each child. A school district unquestionably may consider cost in determining appropriate services for a child. E.g., Clevenger v. Oak Ridge Sch. Bd., 744 F.2d 514, 516-17 (6th Cir. 1984). The school district is required, however, to base its placement decision on the child’s IEP, 34 C.F.R. § 300.552, rather than on the mere fact of a pre-existing investment. In other words, the school district may not, as it appears happened here, decide that because it has spent a lot of money on a program, that program is always going to be appropriate for educating children with a specific disability, regardless of any evidence to the contrary of the individualized needs of a particular child. A placement decision may only be considered to have been based on the child’s IEP when the child’s individual characteristics, including demonstrated response to particular types of educational programs, are taken into account. See Polk v. Cent. Susquehanna Intermediate Unit 16, 853 F.2d 171, 177 (3d Cir. 1988) (noting that the “system of procedural protection only works if the state devises an individualized program and is willing to address the handicapped child’s `unique needs'”) (quoting 20 U.S.C. § 1401(16)). A “one size fits all” approach to special education will not be countenanced by the IDEA.”