Case Law They Use: IEPs & FAPE 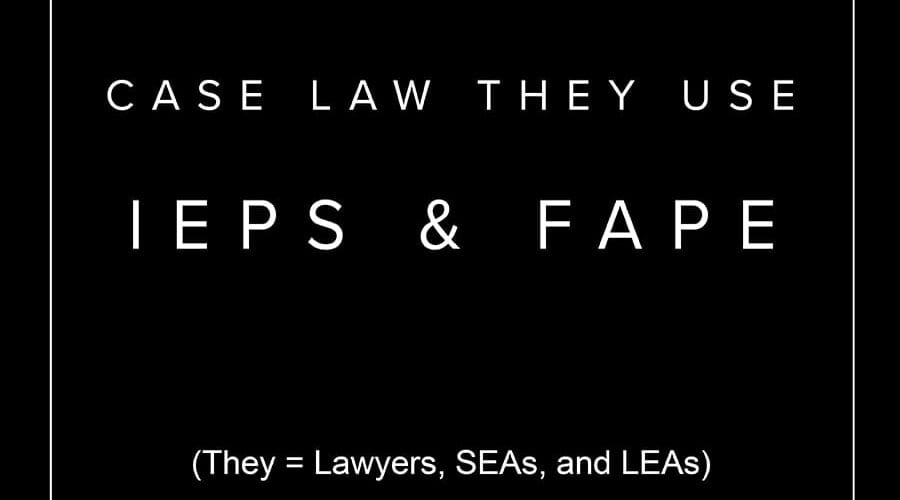 Case Law They Use: IEPs & FAPE

Studying case law cited by your State Education Agency (SEA) and Local Education Agency (LEA) in response to parents’ state complaints, and studying case law cited by LEAs, LEA lawyers, and hearing officers during due process hearings is a good way to prepare yourself to 1) understand special education law, 2) understand the different ways it can be interpreted and inappropriately manipulated, and 3) how to use special education-related case law to argue your own case.

This article starts with Schaeffer v. Weast and will be updated with additional case law.

In a May 29, 2018, Notice of Complaint (NOC), the Virginia Department of Education (VDOE) cited Schaeffer v. Weast to counter a parent’s state complaint that stated an IEP proposed by Fairfax County Public Schools (FCPS) was not reasonably developed to confer FAPE:

Additionally, Parent cites subsequent evaluations and revisions to Student’s IEP as evidence of the insufficiency of Student’s 2016- 2017 IEPs. We note that in Schaeffer v. Weast, 554 F.3d 470 (4th Cir. 2009), the 4th Circuit Court of Appeals found that student’s 10th-grade IEP did not prove that a previous IEP was inappropriate. The Court stated that “[t]o interpret the 10th-grade IEP as an admission of fault as to the 8th-grade IEP would discourage [the district] and other school systems from reassessing and updating IEPs out of fear that any addition to the IEP would be seen as a concession of liability for an earlier one.”

Beyond VDOE’s use of Schaeffer v. Weast

In this case, VDOE changed the parent’s complaint to infer that the parent was using a new IEP to discount a previous IEP. If you’ve ever submitted a complaint to VDOE, you’re aware of its practice of changing parents’ complaints to fit VDOE’s arguments.

This was not a case of a parent using a new IEP to prove fault with a previous IEP.

FCPS failed to do a comprehensive initial evaluation of the student, which meant the student’s initial IEP was not based on his present levels of performance, even though – per Section §1414(d)(1)(A)(i)(I) – and IEP must include “a statement of the child’s present levels of academic achievement and functional performance”. Instead, the initial IEP was based on cherry-picked tests done by FCPS. This is evident in the fact that within three weeks of presenting its initial evaluation to the parent, FCPS re-evaluated the student and found additional areas of need. Then, a year later, FCPS re-evaluated the student again, and again found more areas of need. The areas of need identified a year after the initial evaluation weren’t new. For years, the parent had expressed concerns about these areas of need and FCPS chose to ignore the parent’s concerns and place a limit on its evaluation of the student. This behavior was in line with FCPS denying an evaluation to the student three times between 1st and 6th grades, only to later find (via a private evaluation) that the student had Dyslexia and was reading on a high third grade level in 6th grade (while also getting good grades and passing state exams). From the start, FCPS made it clear that it didn’t believe the student had Dyslexia and its evaluations mirrored that stance.

This case was argued in 2009. The parents wanted what was best. Per case law, all the school had to do was provide an IEP the provided some educational benefit. It didn’t have to provide educational benefit it all areas, or to the highest degree possible. Per Circuit Judge Michael Wilkinson’s opinion:

In the end, the ALJ recognized the primary flaw in the Schaffers’ arguments and the testimony of their experts: the Schaffers sought more than the IDEA requires. As the ALJ observed, the Supreme Court has held that an IEP need not provide the best possible education; instead, it need only provide “some educational benefit,”[emphasis added] or a “basic floor of opportunity.” Rowley, 458 U.S. at 200-01, 102 S. Ct. 3034; see also MM, 303 F.3d at 526. The ALJ realized, however, that the Schaffers and their experts were seeking small classes for Brian in order to maximize his potential. For example, the ALJ observed that Dr. Spodak’s written evaluation of Brian prior to the hearing stated that Brian would “do best” in small classes, not that they were necessary to provide him an educational benefit. Although the ALJ recognized that Brian might have received a greater educational benefit at McLean than from the IEP, the Schaffers failed to persuade him that the eighth-grade IEP was not reasonably calculated to provide some educational benefit to Brian. Granting due weight to the proceedings before the ALJ, we agree that the eighth-grade IEP would have provided Brian a free appropriate public education.