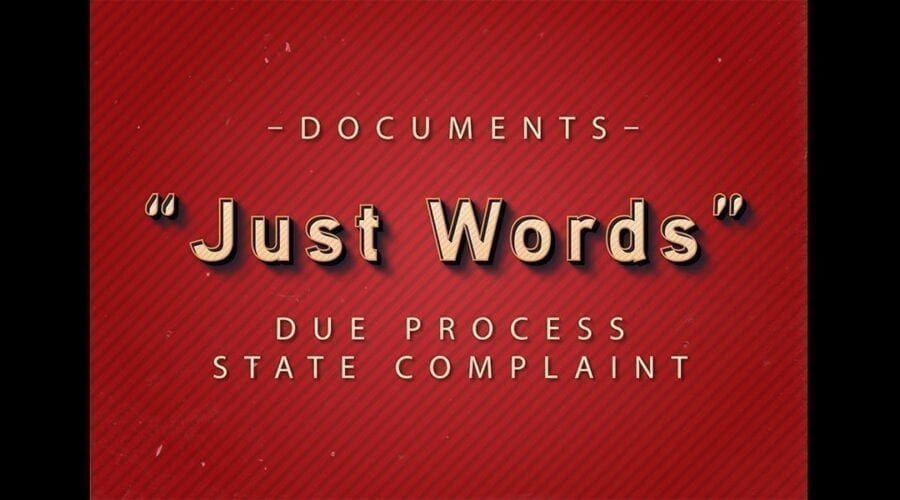 The documents were used in one, or both, of two due process hearings in Virginia that included a focus on the program “Just Words”. In both cases, the hearing officer ruled that “Just Words” is inappropriate for students with Dyslexia. The cases were held within a year of each other (2019 and 2020). John Cafferky of the firm Blankingship & Keith represented Fairfax County Public Schools (FCPS) in both cases.

Negative criticism is reserved for school divisions who 1) administer programs that are inappropriate for students with Dyslexia and/or 2) incorrectly implement programs period.

Documentation from Wilson, the Publisher of “Just Words”

Below you’ll find an article in the Spring/Summer 2019 edition of Wilson’s newsletter “The Decoder”, which is titled, “When It’s Not Dyslexia: Using Just Words”. (Click on the image to view the full article.) The following excerpt appears toward the beginning of the article:

Students diagnosed with dyslexia require intensive instruction to become proficient readers. But what if it’s not dyslexia? What if the problem is mild-to-moderate gaps in decoding and spelling proficiency, and not a significant language-based learning disability? What if students never received strong initial instruction in foundational skills? Wilson’s Tier 2 intervention program Just Words may be the answer.

In the graphic below, Wilson again indicates WRS to be the recommended program for individuals with Dyslexia. Click on the image to view it at a larger size, and then scroll down to the “student focus” section, and you’ll see “dyslexia” under WRS, but not under any of the other programs.

In the brochure below, Wilson again indicates WRS to be the recommended program for individuals with Dyslexia. Click on the image to view it at a larger size, and then scroll to page two, and you’ll see “dyslexia” under WRS, but not under “Just Words”.

In the document “Just WordsÂ®Â or Wilson Reading SystemÂ®?” below, Wilson discusses the two programs and how to choose the one that is best for a student.

In response to a request for a Wilson representative to speak during the hearing, Wilson’s Chief Operating Officer & General Counsel Mary-Janet Cafferty stated

It is just not possible for Wilson to serve as an advocate on the individual level for many reasons- some logistical, but also because we do not have a full picture of the studentâ€™s profile and history.   We do our best to partner with school districts so that our programs are properly implemented with fidelity.

Deanna M. Fogarty, Wilson’s Vice President of Curriculum and Professional Learning, later sent a letter that could be presented during the due process hearing. In the emails to which she attached it, she wrote:

I do feel it will be helpful to those who read it to understand who our programs are for and the importance of professional learning (training) for educators.

The letter Deanna sent appears below. Please click on the image to view both pages of the letter.

The following is the Dyslexia participant slide deck for the 2.12.19 FCPS Secondary Literacy Intervention Teachers “Resource Bonanza”. The slide deck incorrectly states that “Just Words” is “the better dyslexia intervention”, however it does acknowledge that “Just Words” “still may not be appropriate for all students.”