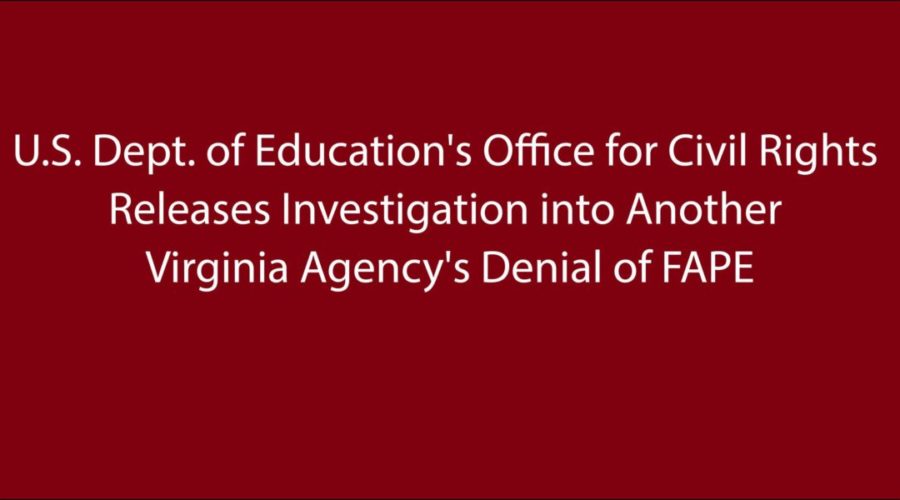 In both OCR cases, OCR identified denial of FAPE and entered into an agreement to address rectifying this denial. In the case of FCPS, the denial occurred when students were denied services and missed significant instructional time during COVID “closures”, while with SECDEF, the denial of FAPE occurred when SECEP did not reassess students who missed significant instructional time due to restraint and seclusion practices. The following are two examples included in the letter of findings regarding SECDEF:

Adding to VDOE’s statewide IEP-related failures, OCR found that of the files for the 28 students whose records it investigated, “SECEP addressed restraint and seclusion directly in the IEP or BIP of only five of the 28 students.” In addition, “OCR’s review indicated that four students who experienced restraint and seclusion had BIPs in place; for one student, the BIP had been developed three years earlier, and, for another student, the BIP was developed in August 2017, after the 2016-2017 school year ended.”

According to OCR, “SECEP’s agreement to change its practices with respect to the use of restraint and seclusion, and its commitment to examine and remedy prior instances where restraint and seclusion of its students may have denied them a FAPE, reflect SECEP’s willingness to serve its students with disabilities.
SECEP’s commitments to resolve the compliance review include:

Unfortunately, identifying students since the start of the 2016–17 school year is six years too late. If there’s one thing that COVID and VDOE have taught the residents of Virginia, it is that change is slow and children’s lives aren’t put on pause waiting for change to occur. The harm done to students can last their entire lives.