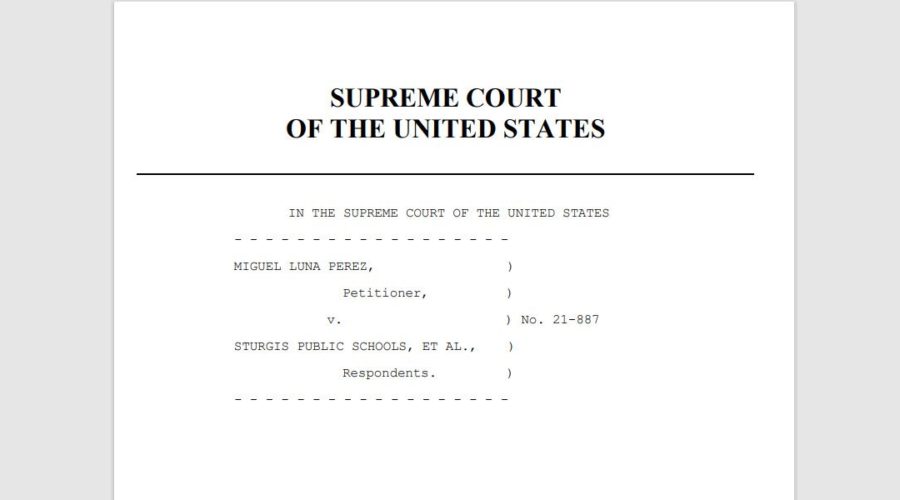 The case focuses on 1) whether, and in what circumstances, courts should excuse further exhaustion of the Individuals with Disabilities Education Act’s (IDEA) administrative proceedings under Section 1415(l) when such proceedings would be futile, and 2) whether Section 1415(l) requires exhaustion of a non-IDEA claim seeking money damages that are not available under the IDEA. It is based on the experiences of Miguel Luna Perez, who was denied a Free Appropriate Public Education (FAPE) for years while attending Sturgis (Michigan) Public Schools (SPS).

Heartache and Lies Instead of FAPE

For 12 years, SPS advanced Miguel Luna Perez from grade to grade and inflated his grades to the point he repeatedly made honor roll, even though he couldn’t read or write—and then just before graduation told his family he would receive a certificate of completion but not a high school diploma. His experiences with SPS during those years are heartbreaking.

Miguel’s family immigrated to Michigan from Mexico. When he was 9 years old, he started school at SPS as an English learner and as a deaf student. He received an IEP, was assigned an unqualified aide who made up signs because she didn’t know sign language, and it gets worse from there. Yet, he advanced from grade to grade and continued to make honor roll over and over again. (Read court records for the case.)

Miguel’s family filed a complaint and SPS agreed to pay for him to attend the Michigan School for the Deaf after high school and to provide the family with sign language instruction.

What SPS didn’t address is the pain of a 9-year-old boy unable to communicate with classmates and teachers, who gradually grew into a teenager with the same communication struggles and inabilities to read and write. In the words of his lawyer Roman Martinez, SPS “neglected Miguel, denied him an education, and lied to his parents about the progress he was allegedly making in school.”

SPS can’t give Miguel back his childhood, the friends he didn’t make, the sports and clubs he didn’t participate in, or the loneliness, sadness, frustration, and pain he experienced, but according to court records, it never even attempted to make Miguel whole and address the lasting scars of the discrimination he experienced. “This shameful conduct permanently stunted Miguel’s ability to communicate with the outside world,” said Roman.

Although SPS paid for him to attend the Michigan School for the Deaf after high school, it didn’t address the emotional impact or Miguel’s loss of college and career opportunities—or the impact of “stunted” communication abilities. After other students graduated and started the next stages of their lives, Miguel was in school, with limited communication skills, reading on an early elementary school grade level. According to an Annie E. Casey Foundation report, “Educators and researchers have long recognized the importance of mastering reading by the end of third grade. Students who fail to reach this critical milestone often falter in the later grades and drop out before earning a high school diploma.” Imagine being deaf and learning to read and sign (not made up signing that prevented him from communicating with others who are deaf) in your late teens, early 20s, more than a decade behind your peers.

Miguel and his parents pursued monetary damages under the Americans with Disabilities Act (ADA), but the Sixth Circuit dismissed the case because his family settled the IDEA portion of the claim through a due process hearing. (Read WrightsLaw’s rundown on the case.)

For 12 years, Sturgis neglected Miguel, denied him an education, and lied to his parents about the progress he was allegedly making in school. This shameful conduct permanently stunted Miguel’s ability to communicate with the outside world. It also violated two federal statutes, the IDEA and the ADA, giving different remedies to victims of discrimination. Miguel responded by doing everything the IDEA wants him to do. He filed an IDEA agency claim. He followed the IDEA settlement procedures. And he accepted a favorable settlement giving him full IDEA relief, including an immediate FAPE. Sturgis wants you to hold that this settlement extinguishes Miguel’s separate and distinct rights to money damages under the ADA. You should reject that. I want to emphasize three points. First, the text only requires exhaustion if a non-IDEA claim seeks relief that’s actually available under the IDEA. Exhaustion isn’t required in cases like this one seeking only money damages, a remedy the IDEA does not authorize. Second, Miguel’s settlement fully exhausted the IDEA procedures. Further exhaustion is unnecessary and it’s futile because it would be pointless. Miguel has already received everything he’s entitled to under the IDEA statute. And, third, the net effect of Sturgis’s arguments here is to defy the IDEA’s clear purpose. That purpose is twofold: one, getting kids a FAPE as quickly as possible, and, two, preserving their legal rights under other statutes and the Constitution. Sturgis puts these goals on a collision course with each other. In any given case, its rule will either disincentivize settlements and block immediate FAPE relief, or it will nullify rights under other statutes. That makes no sense. Congress didn’t punish kids for saying yes to favorable IDEA settlements. One way or the other, this case should proceed.”

The Justices’ questions for Roman and later to SPS’s counsel Shay Dvoretzky could be interpreted to favor Miguel, but in the world of special education, too many disappointments have occurred to predict favorable outcomes. However, it’s hard to ignore Justice Kagan’s response to Shay in the following exchange, which hits on a reality of due process cases in particular: Parents would be hard pressed to find a school district that proactively offers to make a student whole and propose resolutions that fully address denial of FAPE. In the case of Miguel, SPS moved him along for years without proactively proposing it fully address its noncompliance. Instead, parents like Miguel’s too often have to point out the noncompliance and negotiate a resolution. This takes extensive knowledge of IDEA, time, and money—a trio that are rare to find combined—and the stomach to face school systems with the budget to wage long-term lawfare.

Shay Dvoretzky: . . . And, lastly, on the equities, as I was saying to Justice Barrett, in light of the state of the law right now, it’s not clear that there even are compensatory damages available under the ADA. And so there is no great inequity in holding as a default rule that once you have gotten the FAPE, which was Congress’s, again, primary purpose in enacting the IDEA, once you’ve gotten that, at that point, you have gotten —

Justice Kagan: Well, no, no one’s decided that question yet, Mr. Dvoretzky. So, while those damages remain open and potentially available, the question is, you know, what should Miguel have done? I think Mr. Martinez stood up and the first words out of his mouth were Miguel did everything right. And it’s hard for me to see how that’s not true. What should Miguel have done differently from what he did do in this case?

Justice Kagan: But, you know —

Shay Dvoretzky: — the full relief he was asking for.

Justice Kagan: — Sturgis was not, for all we know, offering any of those things. So what’s he supposed to do?

Shay Dvoretzky: Negotiate, I mean, as in all settlements.

Justice Kagan: Better — negotiate better. Just pound his fist on the table with your legal rule such that Sturgis doesn’t have to offer any of those things because he can’t — he has two choices. He can either reject a good settlement which is enabling him to receive educational services or give up on the potential, which this statute clearly gives him, of getting compensatory damages as well under the ADA.

Shay Dvoretzky: Justice Kagan, I think that takes us back to the default rule point, which is whichever rule this Court adopts, either side could, if it wanted, pound its fist on the table and insist on one outcome or another. Either you can — either a plaintiff can insist on getting full recovery or a waiver or a school district could insist if it wanted to on no deal unless it gets a waiver. I mean, I’m sorry, unless it gets a full release. The other point that I’ll make as a practical matter, though, and I think it’s also true in this case, although these facts haven’t been developed because the case hasn’t been litigated, school districts have an interest in starting to provide the FAPE as soon as they are aware and as soon as their lawyers make their aware — make them aware that there has been some deficiency. It’s not in a school district’s interests to say we’re going to hold the FAPE hostage.

Justice Kagan: But parents also have an interest in that, and that suggests why your sort of the sky is falling isn’t going to happen, because, of course, parents are not going to bypass the process that gives them most speedily, most inexpensively, the opportunity to get the education fixed. So, yes, they’re going to go and — and try to get that, but, at — you know, at the same time, they may also want, you know, I’m entitled under the ADA for damages.

Shay Dvoretzky: Justice Kagan, I don’t know that as a practical matter that that view of how parents will operate is always going to be true. Having spoken —

Justice Kagan: Well, I don’t know that your view of how school districts are going to operate is always going to be true. As between the two, it strikes me that actually it’s the parents that have the greater incentive to get the education fixed for their child.

Shay Dvoretzky: I think that sometimes that —

Side note: Justice Kagan and SPS’s counsel might look to the Office for Civil Rights’ findings of noncompliance in relation to Los Angeles Unified School District (LAUSD) and Fairfax County Public Schools (FCPS). The behaviors of these two districts—among the largest and wealthiest in the United States—provide an example of schools that do not “have an interest in starting to provide the FAPE as soon as they are aware and as soon as their lawyers make their aware — make them aware that there has been some deficiency.” Indeed, the amount of money FCPS has spent on legal counsel and actions it has taken against students and their families indicate FCPS believes it is in the “school district’s interests to say we’re going to hold the FAPE hostage.”